Last week I was drinking Weyerbacher’s Double Simcoe IPA and it inspired me to write a blog entry about single malt/hop beers that I’ve intended to write for quite some time. But before diving in to the broader topic, a little information about Double Simcoe IPA. This Imperial India Pale Ale is brewed by Weyerbacher of Easton, Pennsylvania using only a single hop – Simcoe. It pours a hazy copper color with a sticky off-white head. As to be expected, the nose is all Simcoe. There was plenty of citrus and grapefruit, but even more pine. The taste was dominated by the single hop being highlighted, but there was also plenty of caramel along with some phenols and a touch of diacetyl to keep the beer from being one-dimensional. 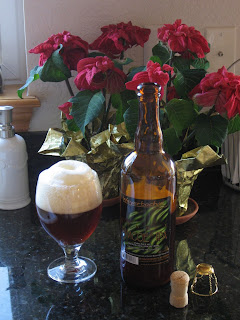 It had a warming character in the finish (it is an 18 proof beer) along with more Simcoe character as I exhaled. An excellent imperial IPA that was well balanced, and it did an excellent job of highlighting Simcoe hops added at various stages during the brewing and fermentation process.

Single ingredient beers are an excellent way to learn more about the character one particular ingredient contributes to the finished product – whether it is a single malt, or single hop. Often as homebrewers we are programmed through the many books, magazine articles, and Internet posts we read to use a variety of specialty malts and a number of different hops types to add complexity. And most US craft brewers have their roots in home brewing, so this mindset carries over to our local specialty beers. There is nothing wrong with this, and many beers benefit from this approach. And I must admit, there are times I love brewing an “everything but the kitchen sink” Porter. But there is also something to be said about simplicity in brewing. Many of the world’s greatest beers are put together in a very simple manor.

One thing that really surprised me at first during my travels through Bavaria while visiting breweries was the lack of specialty malts. While touring the brewery at Kloster Reutberg (south of Munich) the brewer and guide took us to the attic where the malt was stored. Besides the cat, whose job was to keep the mice away, all I saw were hundreds of bags of Helles Malz (Pils Malt) and Dunkles Malz (Munich Malt). Reutberg’s Helles is brewed with 100% Helles Malz, and their Dunkles is brewed with, you guessed it, 100% Dunkles Malz. Their Bock is a stronger version of the Dunkles. Their amber Festbier is made with a 50/50 blend of the two. Rather simple. As you know many Bavarian beers are world class, and Reutberg’s fit into this category. This proves it doesn’t take an elaborate grain bill to brew great beer.

I got the same story from Winkler Bräu’s brewmaster Karl Winkler. (Schlicht, Oberpfalz – east of Nürnberg) Karl said they purchase their malt from a local maltster. The grain bills at Winkler Bräu are also very simple. With respect to hops, they exclusively use locally grown Hallertauer, with the exception of their Pils, which is hopped with the more expensive Saaz from down the road in the Czech Republic. What is the result? In my opinion, their lager beers are second to none.

Homebrewers – Give it a Try

As a homebrewer don’t be afraid to simplify. If you want to have a better idea what type of character Vienna malt will contribute to your beers, brew a 100% Vienna malt beer. If you’re a hophead, back off of the hop potpourri and simply try one variety. This can be very educational. In the process of designing a beer to brew, you can then rely on these beers to better understand how those hop varieties will influence the finished product. On the single malt side, I just brewed a 100% Maris Otter English Barley Wine. Weighing in at 16%, it has plenty of malt character and complexity. The key is to use fresh, quality ingredients, and the result is sure to be good - simple or not.

Nobody wants to brew a bland beer, but complexity can be derived from other factors than adding multiple specialty grains or hop additions of varying types. The yeast obviously contributes a significant amount to any beer’s character. But other factors also have a major influence on the finished beer – such as brewing water (think Burton upon Trent), mash schedule (decoction), fermentation process (closed/open), lagering, and even how a beer packaged and dispensed. (Warm and flat from a beer engine?) All of these factors can be tweaked to add character to any beer. As a homebrewer our options are limitless, and we are not constrained by fixed systems or budgets.

So keep in mind, some of the world’s best beers, lagers and ales, are very simple. I feel keeping the grain bill uncomplicated and hop schedule straightforward is an excellent way to produce fine beers, and learn more about what that particular ingredient lends to the character of the finished product.
Posted by Cody Christman at 11:44 AM