During the “bribe the judges” segment of the 2010 Beerdrinker of the Year finals, Sterling Alaska finalist Bill Howell offered the judges, me included, an invitation to visit he and his wife Elaine in Alaska. The pledge was unconditional, win or lose. (He did end up winning as you now all know.) I’m not sure if he ever thought anyone would take him up on the offer, but this year Joycelyn and I did.

Sterling is located on the Kenai Peninsula. When planning a trip to Alaska, one must keep in mind how big of a state you are visiting. It is approximately 20% of the land mass of the entire lower 48. So unless you have an endless summer, you have to pick and choose areas to visit. We chose to tour the Anchorage area, the Kenai Peninsula, and Prince William Sound. It looks like a tiny fraction of the state on a map, but unless one takes a cruise, it is probably the most productive way to spend two weeks in our 49th state. 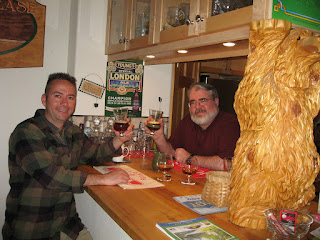 It offers all of what most travel to Alaska to see. Wildlife, hiking, fishing, birds, glaciers… and of course beer. Alaska has 24 breweries, more than a third of which are easily drivable within this area. Kenai offers the highest concentration of breweries with four serving the 50,000 residents of the Peninsula. (Not to mention a fine Meadery in Homer.)

Bill and Elaine were wonderful hosts. In addition to showing us the local sights, and spending a night listening to Hobo Jim (“Alaska’s State Balladeer”), they shuttled us to all three of the breweries in the Sterling area.

We first visited Kenai River Brewing Company (http://www.kenairiverbrewing.com/Welcome.html) in Soldotna. The front of the brewery serves as a small tap room and a place where customers can buy and sample beer. None of the brewers were present, but Bill knew the gal working the counter and we were allowed to go back to the brewing area. Bill gave me a quick tour of their 10 barrel system, which now includes two shiny new 20 barrel cylindrical-conical fermenters. Kenai River is packaging their product in twelve ounce cans, and demand has been robust. I did notice in the liquor stores that only a few of the breweries in Alaska do sell six packs. Others serve only in their pubs or restaurants, or put out specialty bombers to sell in liquor stores. Kenai River’s new fermenters were needed to keep up with demand. After a brief tour we enjoyed a pint while chatting with the attendant. I partook of their Breakfast Beer, a smooth, clean, and jet black Stout brewed with oatmeal and lactose. This brewery has a solid lineup of ales, lagers, and an American-style Hefeweizen.

Next it was up the north road toward Nikiski to visit Kassik’s Brewery. (http://www.kassikskenaibrewstop.com) Frank Kassik was nice enough to give Bill and I a tour of his shop. Over the years he has pieced together quite a setup. The brewery started off modestly with a used seven barrel system, and has been updated over time to keep up with demand. He uses a diatomaceous earth filtration system before packaging, which I enjoyed looking over. (Joycelyn’s brother mines DE) Kassik’s currently bottles some of their offerings in bombers, but they are also considering a canning line. Frank, like many other brewers I met in Alaska, seem a bit overwhelmed at times with their own success. They’ve gotten on a horse which has taken off, and now they’re on for the ride! A better problem to have than not being successful. Demand for quality craft beer is strong in Alaska. 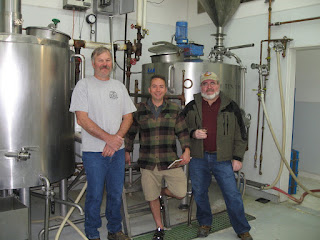 After the tour Frank and his wife poured us eleven samplers from their tap room. They even broke out a 2008 Barleywine, which was a real treat. It had a wonderful roasty-caramel and dark fruit flavor and a nice hop finish. Kassik’s beers in general are not over-the-top, I found them all true to style and very enjoyable!

We finished at the St. Elias Brewery (http://www.steliasbrewingco.com), which can’t be missed right on the south side of the Sterling Highway just east of Soldatna. St. Elias is a full-on pub (not just tap room) with a restaurant serving excellent pizza and other dishes. After the four of us were seated, head brewer Zack Henry took a break from brewing, came by our table, and gave us a tour. “What do two beerdrinkers-of-the-year talk about when they get together?” he asked Bill and I. “Single malt Scotch Whisky, naturally,” I replied with a smile. Zack and Bill are good friends, and Bill has brewed with Zack on his system before. The brewery section of the building was packed with every bit of free space being consumed by equipment or barrels. Zack is doing a lot of experimentation with wood. His seasonal Off The Hook is a wonderful Belgian Dubbel aged for six months in second fill bourbon barrels. Even with the second fill of beer, the barrels still imparted a distinct whiskey flavor. Zack also broke into his private stash for us giving Bill and I a chance to sample the same beer but aged in virgin oak. The result was two different beers highlighting the impact of the wood. Zack is also experimenting with cask ales. Currently St. Elias has a Firkin Thursday using gravity feed Ales out of pins, but they are considering purchasing a couple of beer engines for their cask ales.

Like Frank Kassik, Zack appears a bit overwhelmed. The price of success. St. Elias typically carries five staples and four seasonals. The seasonals get more interesting during the winter when he has a bit more time to experiment when things slow down after the tourism season.

The fourth, and oldest, brewery on the Kenai Peninsula is the Homer Brewing Company. Alaska and it locals have very strange alcohol laws, and it is very apparent here. The brewery can provide two small samples, and beer for takeout, but that is it. To circumvent this restriction, the brewery has set up a small tent in an empty lot next door. Customers can buy beer from the brewery and go around the corner to drink and socialize. They serve their beers in 20 oz used Sobe bottles with screw on lids. A very interesting packaging method that I have not seen before. 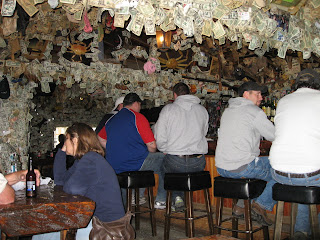 I sampled several of their creations, but my favorite was their Old Inlet Pale – a murky gold/brown ale with a very nice nose of fruity yeast and earthy hops. It has a sweetish, light flavor with a mild hop finish. In my opinion a fine Bitter that would be excellent served out of a beer engine.

If you ever visit Homer, a must visit pub is the Salty Dawg out on the spit. Locals and tourists pack this tiny den telling fishing stories after a day out on Kachemak bay. (some true) The Dawg definitely has character. You name it and it was hanging from the ceiling. Thousands of dollar bills, pictures, signs, hats, bras, etc. And while enjoying the atmosphere, have one of the Homer Brewing beers they serve. A young bartender that looked exactly like a 25 year old David Crosby – hair, walrus mustache, vintage shirt and all, served my bottle. The Salty Dawg is a must visit in artsy Homer.

Our time in Anchorage was limited, but we did make it to the Glacier Brewhouse (http://www.glacierbrewhouse.com) and restaurant right in the middle of the downtown area. This was by far the most commercial pub or brewery I visited while in Alaska. It is popular, and it was packed. There was a wait to be seated, but one nice thing about visiting Alaska in the summer is that there is little time pressure. It stays light late – the sun doesn’t go down as much as it just spins around the horizon. With that said, we were able to find a table in the self-seating pub area after about 15 minutes. A wonderful alder smoke fills the restaurant from fish cooking over open fires. The brewhouse is visible on the other side of a glassed-in wall. Glacier has a great selection of beers - nine on tap, a couple of them cask. The cask Pale Ale I had was hand drawn without a sparkler on their beer engine – a wonderful pint, and what a cask ale should taste like! This is a great place for an excellent dinner and great selection of craft beers.

Joycelyn and I also visited Humpy’s Alehouse (http://www.humpys.com/anc/), which is just a block away. During the tourist season it is crowded and loud, but a nice pub atmosphere regardless. We shared a table with a couple that were nice enough to let us join them. Humpy’s has Alaska’s largest selection of beers on tap, including 21 Alaskan beers, a number of which come from isolated breweries like Silver Gulch and Denali Brewing Company. My favorite was Silver Gulch’s Epicenter (7.9% abv), which was served in an 8 oz snifter. Though billed as an American Strong Ale it had a very mead-like character. Epicenter was dark gold, like a Maibock, with a thin white head. It had a fairly clean, though slightly estery nose. It was quite sweet with a light body, and finished with notes of clover honey. The alcohol content was very deceiving. It tasted quite light and was very pleasing.

We also drove to the Midnight Sun Brewery south of town, but it was closed. (http://midnightsunbrewing.com) Unlike us, make sure and check times before visiting any of the breweries listed. Like I noted earlier the tap rooms can have strange laws. With that said, I did taste some excellent Midnight Sun offerings at Humpy’s and during my travels. Bill also gifted me a 2008 Arctic Devil Barleywine that was superb. Thanks Bill!

There are two other breweries in downtown Anchorage that I did not get a chance to visit - The Snow Goose Restaurant & Sleeping Lady Brewery (http://www.alaskabeers.com) and the Anchorage Brewing Company (http://www.anchoragebrewingcompany.com). The latter happens to be in the basement of the former. Anchorage Brewing is a new project of former Midnight Sun head brewer Gabe Fletcher. All of Gabe’s beers are barrel aged with brettanomyces and bottle conditioned. I’m not sure you can visit the brewery at this time, but look for his first offering, bombers of Whiteout Wit, at select liquor stores. The final brewery in Anchorage is Moose’s Tooth (http://www.moosestooth.net), which is east of downtown. From what I hear from other beer lovers, it offers great beer and is a hopping pizza joint.

In my experience, all of the restaurants and pubs we visited showcased a solid selection of fine local craft beers. Alaska has evolved to have a great beer culture, and why not. The climate lends itself to hardy drinks. I enjoyed several stouts while in the state, something that is not as quenching during the summer months in a warmer climate. I’ve always said, “Never drink a beer from a country that does not have a true winter.” Well Alaska is a state, not a country, but you get the picture. Alaska and beer simply go together.
Posted by Cody Christman at 12:36 PM