2013 Beerdrinker of the Year National Finals

Before I provide my latest Porter recipe to the homebrewers out there, I want to remind everyone that this year's BDOTY Finals are on Saturday, February 23rd at 2 pm.  The competition will be held in the Wynkoop's Mercantile Room.  Get there early to nab a seat and have time to enjoy happy-hour priced beers.  More information can be found on the Wynkoop's website.

Every year Joycelyn and I host a New Year's party for friends.  It is one of those parties that lends itself to brewing a cask ale since there are plenty of people over to make prepping the handpump worthwhile.  Beer engines are great, but they are not practical for onesie-twosie beer evenings.  There is a bit of waste priming the handpump, and more waste flushing out the device after using.  One tip if you decide to purchase a beer engine for your pub, get the quarter pint sized cylinder.  (like an engine, they house a piston and a cylinder...)  They also come in half and full pint sizes, but for a home system, the larger sizes will waste more beer on the front and back end of your evening.

Now back to beer...  Winter is a great time for dark beers, so to help usher in this New Year I decided to brew a Porter.  "Midnight Silk Porter" is its moniker.  Midnight since it was a New Year's party, and silk, because that is how I wanted it to taste - smooth.

In formulating this recipe, I practiced my own philosophy - keep it simple.  Sometimes simpler is better.  (For background reference my June, 2011 blog - Single Malt/Hop Beers.)  Now a Porter is not a single malt beer, but I still attempted to minimize the variety of grains used.  My goal was to brew a fine, smooth ale - something similar Fuller's London Porter.  The type of dark beer that invites you to have more than one. 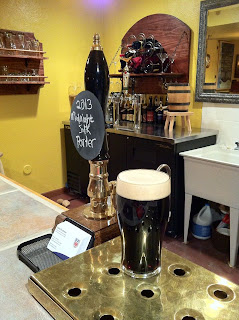 Many brewers view the Porter style as an "everything but the kitchen sink" beer.  The same could be said for stouts.  This often leads to over the top, and overly dark beers in my opinion.  Many American Porters and Stouts pour jet-black.  This is not the case with traditional dark beers.

Guinness is not opaque, rather a dark ruby red.  Though many simply consider it "black."  Does a beer really need to be darker than Guinness?  As a matter of example, a good friend returned from spending Christmas in Ireland with family.  He and his cousin were drinking pints in a pub that happened to have an under-lit tabletop.  Half way through their Guinness they looked down and thought someone had replaced their stouts with Smithwicks!  Next time you are drinking an Irish stout shine a flashlight through it.  My point is, beers don't need to be over the top, or so packed with dark malts that they pour like used motor oil to be world class.

Note that this beer has a relatively low bitterness of 21 IBUs.  Though not always the case today in American breweries, traditionally dark beers are lightly hopped.  The darker grains provide the bitterness to balance the sweetness of the malt, therefore high hop rates are not needed.

I use dehusked Carafa to derive most of the color instead of more Chocolate, Roasted Barley or Black Patent.  Carafa is an excellent coloring malt, and contributes little roast character.  The burnt/roasted husk of many malts lead to roasty "coffee" flavors.

Finally, I fermented this Porter with Wyeast 1187 Ringwood Ale.  This strain ferments a bit slower and is less attenuative than other British strains, but it has excellent character and has always made superb beers for me.


I can't think of anything I would change in this beer.  It pours dark oxblood with a very creamy off-white head.  It tastes very pleasant and smooth with a light, clean body - though with rich ale character.  It finishes earthy and fruity, with a mild roast character.

This ale is pretty simple for a Porter.  Simplicity does not mean lack of complexity.  I love this beer, and everyone at the party seemed to agree.

Posted by Cody Christman at 5:34 PM No comments: