Last month Joycelyn and I were in California to spend Christmas with her family in McArthur. On the four-hour trip north from the Sacramento airport to her hometown, we stopped (as usual) at the Liquor Barn in Redding. This liquor store has the best selection I’ve found along our path, and I always discover something new that is available in California that I cannot get in Colorado or Montana. This year one beer really caught my attention – Schneider Weisse’s Hopfen Weisse. I though I had tried all of Schneider’s offerings, either here or in Germany, but this beer was new to me. It turns out Hopfen Weisse is collaboration between Schneider Weissbierbrauerei in Germany and Brooklyn Brewery in New York.

Collaboration beers are not unique. They have been around in the US for well over a decade. (Probably since the dawn of brewing thousands of years ago, right?) The first major collaboration I remember was back in 2004 called “Collaboration not Litigation Ale” made by Avery and Russian River. Both breweries had Belgian-style beers called “Salvation.” Instead of fighting over which brewery owned the name, they decided to join forces. Since that time I have noticed a major trend and many more collaborative offerings. Along with wood aging, over-hopped ales, and extreme beers, collaboration beers have become the craze.

With all of that said, I was surprised to see the Bavarians getting involved. Most collaboration beers I’ve seen have been US – US or US – Belgian joint efforts. Which makes sense. The Belgians are crazy, open-minded, “anything goes” brewers never bound by rules or norms. And the only country in the world that tops them when it comes to creativity would be the United States. 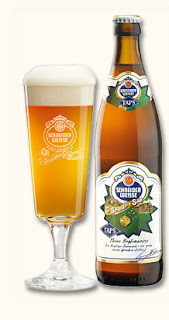 But the Germans are anti-Belgians. German brewers are almost exclusively classically trained (most at the world’s most famous brewing university – Weihenstephan), and with extreme discipline they methodically crank out consistent and delicious, high-quality beers within the ridged structure of the Reinheitsgebot. The Germans are engineers that brew. So along with another collaboration, the Boston Beer Company (Sam Adams) / Weihenstephan holiday special “Infinium,” I was a bit surprised to see Hopfen Weisse.

It is not like Schneider and Weihenstephan are renegade breweries; these two are a pair of the most famous and traditional breweries in Bavaria. In 1872 Georg Schneider almost single handedly brought Weissbier back to popularity in Bavaria, and the brewery today is very traditional brewing exclusively wheat beers. Weihenstephan Abby is home to the famous Technical University of Munich brewing school, and is the location of the world’s oldest continuously operating brewery – licensed in 1040 and still operating. Two very famous and traditional breweries letting their hair down a bit.

Brewmasters Garrett Oliver (Brooklyn Brewery) and Hans-Peter Drexler (Schneider Weissbier Brewery) have long admired each other’s work. (Garret is a master chef and author of “The Brewmaster’s Table” and a wonderful ambassador for the craft beer industry.) Hopfen-Weisse (Hopfen means hops) is a collaboration between the two creating a pale Weissbock (strong wheat beer) that has been dry hopped with the noble hop Hallertauer Saphir. It is billed as a blend of Bavarian craftsmanship and American ingenuity. Traditional Weissbier is almost always lightly hopped (< 15 IBUs) and never employs finishing hops. The goal is to de-emphasize hops and let the body of the wheat and the flavor and aroma of the unique yeast shine through with lots of fruit and clove. Hopfen Weisse is not an extreme collaboration (like many), rather a “noble” deviation from a classic Weizen.

After purchasing a couple of these beers at the Liquor Barn, I finally got a chance to sample them in the small town of McArthur. On the nose I initially detected the classic Weizen clove aroma followed by a dose of fresh, grassy noble hops. The hops were not overpowering, but definitely there – and not citrusy like an American IPA. The high carbonation of this beer helps drive all of these aromas out of the beer. In the glass it was a turbid orange color – a touch lighter than Schneider’s original Weissbier despite the higher alcohol content. Its flavor was packed with banana and clove along with pleasant, grassy hops. It had lots of body and that silky wheat beer viscosity. The Nachtrunk was like a standard Weissbier, but with a drier hop note. Overall, Hopfen Weisse is not a drastic deviation from Schneider’s standard product, but definitely unique. I never thought I would taste a “classic” German Weizen with a significant hop character!

If you get a chance to pick up a ½ liter of this beer let me know what you think. Also, I would like to hear what your favorite collaboration beer is. I’m always looking for new specialties to try.
Posted by Cody Christman at 3:59 AM No comments:

Last night the Wynkoop tapped Hickenloooper’s InaugurAle, a beer brewed to honor the Koop’s founder John Hickenlooper. For those that have not heard, the former mayor of Denver won last November’s gubernatorial election and will be sworn into office on January 11th. To celebrate the occasion, head brewer Andy Brown created the special brew.

Inaugurale is a cross between a Brown Ale and a Winter Warmer. Weighing in at 6.8% abv, it is definitely not a Newcastle Brown Ale clone. The beer is actually an offshoot of the former Wynkoop staple Flying Artillery Ale. (Now a rotator.) There are a few twists for this version, including the use of local ingredients. Inaugurale is made with oats, honey malt, crystal malt, black patent, chocolate malt, and Colorado-grown base malts. In addition, Colorado beet sugar is added to the boil for complexity and to boost the original gravity. Given this beer is brewed to honor Colorado’s governor-elect, it is fitting that Colorado ingredients make up the majority of the frementables. Andy Brown’s concoctions are consistently delicious, and Inaugurale is no different. My friends and I had a few pints last night and enjoyed every drop. Governor-elect Hickenlooper was in the building for the tapping, and he signed a poster of the beer’s logo for the brewers. Andy came by our table proudly showing it off and said he intended to frame the poster and hang it in the brewery. 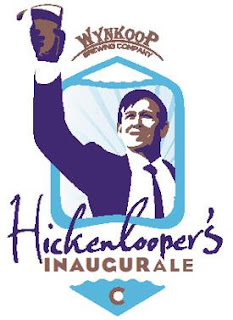 John Hickenlooper is obviously popular in Denver and Colorado, but he is more than that to area beer lovers – he is a hero. John and three friends (Russell Scherer, Mark Schiffler, and Jerry Williams) had a vision back in 1988 – to open a brewery in a run-down part of old Denver. But there was a problem. At the time, Colorado law prohibited brewpubs. John successfully lobbied to have that law changed, which laid the foundation for the opening of Colorado’s first modern era craft brewery, The Wynkoop Brewing Company. Now, 22 years later, there are over 100 breweries in Colorado – the “Napa Valley of Beer.” The governor-elect was not simply lucky, being at the right place at the right time, rather he paved the way for craft brewing and started a revolution. Now when people think of Colorado, they think of beer. (A quick aside. Joycelyn and I were bellied up to the bar eating dinner at a packed Czech-style restaurant in Stockholm Sweden back in 2008. A Swede sitting next to us at the bar was eavesdropping on our discussion and found out we were from Colorado. He excitedly butted into our conversation and went on and on about how bad he wanted to visit Colorado and travel around touring all of the breweries and take in festivals. Not England, not Germany, not Belgium, but Colorado! We’re big, even in Europe!) And not only did John and his buddies create an industry, they revitalized an entire section of the city of Denver – an area now affectionately known as LoDo (Lower Downtown). During my first visit to the Wynkoop in 1990, there was nothing except for vacated buildings and bums for blocks around crossing of 18th and Wynkoop streets. Now that area of town is bustling with activity with restaurants, bars, clubs, and of course other breweries, at every turn. Would this have happened anyway without John? Maybe… eventually… probably… But it still took someone with the vision to do it, and John was that person. 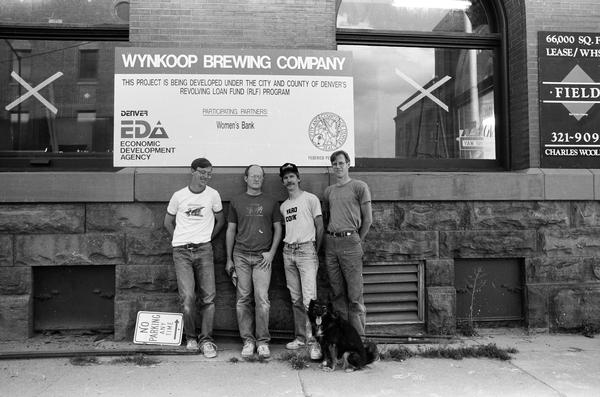 It will be great to have a friend of business and brewing serving as the Governor of Colorado. If you get a chance, head down to the Wynkoop for a pint of the beer made in his honor. Only 15 barrels of Inaugurale were made, so it will probably be gone before the end of January. And while you are there take some time to walk around the halls and side rooms of the main level and upstairs of the building. You will be able to see some great old pictures of the brewery building and the area from the late 80’s. It is amazing how much things have changed in a little over two decades.
Posted by Cody Christman at 5:07 AM No comments: