Last weekend some friends and I were finally able to make it up into the mountains for our annual snowcave camping trip. The area where we camp is at 10,200’ in elevation outside of Ward, CO. This area gets a good amount of snow and lots of wind that creates large drifts. We dig down, in, and up into these drifts to build our caves. A storm on the previous weekend, our original trip date, dumped over three feet of new snow in that area. Luckily we postponed the trip, because we would have never made it close to our usual camp location. 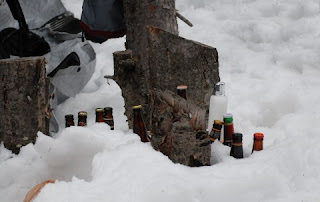 Constructing a good cave takes a lot of hard work. After several hours we are all soaked inside (from sweat) and out (from digging & moving snow and from the elements). 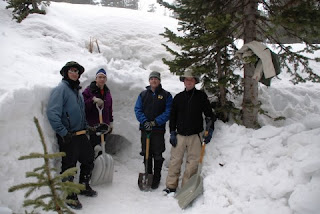 But a properly constructed cave is very cozy and warm. We’ve been doing this since the early 90’s, so at this point we are pretty good at the process. And the hard work is well worth the effort, because after we are done we get to crack open a few beers. They are well earned, and taste better because of the sense of accomplishment. Luckily our camp spot is only a quarter of a mile from our vehicles, so we don’t have to skimp on gear, supplies, or beer. After arriving and before digging, we take care of our bottles. The snow makes for a good cooler. Sticking the bottles in the snow keeps them from getting too warm on sunny spring days, and too cold in sub freezing temperatures. And a light cover will keep the bottles from getting light struck and skunked. That was not a problem last Saturday since we had cloud cover and flurries most of the day. 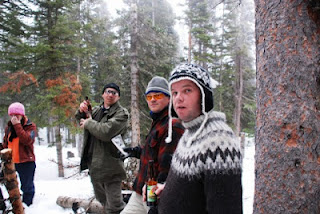 Big, strong beers are the norm at this outing for our group. (though Charlie did bring a cold pack of Session Lager one year) I like to organize what I call the “Doppelbock challenge.” We’ll bring up four different types of Doppelbock and all sample them and compare notes. It is a great way to warm up before dinner. This year’s victims were Paulaner Salvator, Spaten Optimator, Weltenburger Kloster Asam-Bock, and Sam Adams Imperial Double Bock. All are wonderful beers and highly recommended. You can pick your favorite after trying them all for yourself. And after dinner we compared and contrasted two different sounding, yet similar beers: Thomas Hardy’s Ale (and old ale) and Flying Dog’s Horn Dog (a barley wine). I have always loved Thomas Hardy’s, but it is very expensive. Horn Dog is not cheap either, but a touch more reasonable, and I feel it is an excellent American made alternative for Thomas Hardy’s lovers. The two ales taste very similar, but we all agreed that Thomas Hardy’s was a touch more complex, a little sweeter, and with more dried fruit character. They were both excellent, and as the Horn Dog ages, it too may develop similar flavors. It is hard to beat either of these beers if you can get your hands on them! 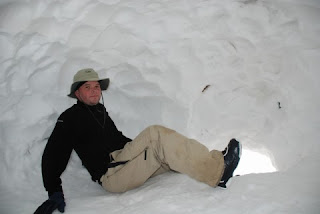 A couple of final notes. I love my plastic camping “Pilsner” beer glass that I bought from REI. (see photo) The base unscrews and snaps on the top for easy packing. It is very light and extremely durable. In addition, I can store my Whisky glass inside the beer glass to keep it safe while in my pack. I have to drink my Laphroaig 10 year out of a real glass, not plastic or titanium. For this purpose, I simply use a 5 oz “taster” glass that many brewpubs use. It is glass, but more sturdy than the Riedel crystal Whiskey glass that I use at home. And the camping glass protects it. Another accessory I recommend is the “Jammit Personal Outdoor Table.” (http://www.mtmcase-gard.com/products/camping/camp.html) These things crack me up. 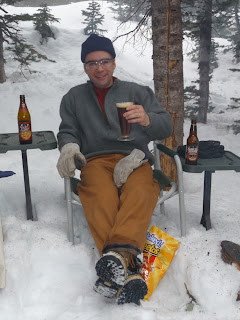 The Jammit makes a great table, and if you are ever attacked by a bear, you can pull it out of the ground and use the business end to fend off the beast. They are so dangerous they should come packaged with a set of lawn darts. So if you buy one make sure to be careful after your own Doppelbock challenge!
Posted by Cody Christman at 12:40 PM No comments:

One of my favorite breweries is the Brasserie de Rochefort located in the Abbey of Notre Dame de Saint-Remy. It is one of seven Trappist breweries. (The other six being Chimay, Orval, Westmalle, Westvleteren, Achel, and Koningshoeven, a Dutch brewery and the only of the seven that is not in Belgium.) Rochefort brews three beers, Rochefort 6, 8 and 10. These beers can be difficult to find, if you can find them at all. And I have only seen Rochefort 8 and 10 in the US. Rochefort 8 (9.2% ABV) is my favorite, though I also love Rochefort 10 (11.3% ABV). I simply find 8 a touch easier to drink. All three are said to be brewed from an identical mash, just with varying amounts of candy sugar added to the boil in order to increase the initial gravity. If you have never tried them, I highly recommend it. Both the 8 and 10 are sweetish, viscous, dark beers. (rich brown in color) They are very complex ales with a very effervescent, fruity nose. The dark fruit aroma comes from a combination of the yeast, as well as rich flavors from the malt and caramelized candy sugar. The flavor closely follows the aroma, and the nachtrunk is long, rich and smooth. The Rochefort yeast is very fruity, but unlike other Trappist beers such as Achel and Chimay, it is not quite as phenolic and bananay. All are wonderful beers, but I find Rochefort to have a very bold and pleasing yeast profile with out the bite of some other Belgian ales. In addition, their beers are not nearly as dry as many Belgian ales. 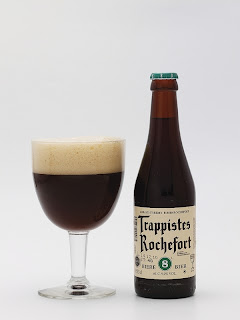 So please help me out with my question. (bare with me) Last weekend was set aside for snow cave camping, but we were snowed out. Three feet of fresh snow kept us from even attempting our trip. (postponed until this weekend) Since I suddenly had a free weekend, I decided to brew a batch of beer on Sunday. I chose to brew a Rochefort/Dubbel style of beer. I normally plan and research for a couple weeks before brewing a new style of beer, but given time constraints, I designed this beer in a couple hours. (see recipe below)

One thing really surprised me when researching Rochefort beers. Many of the clone recipes I found included coriander. I have consumed numerous Rocheforts over the years, and I have never detected coriander. Nor do I remember any dark Belgian beers being spiced. So I opened a 10, and sure enough, the power of suggestion took over. If I thought about it hard enough, I could detect some coriander. (Which smells like orange) But there are a lot of fruity aromas and flavors going on with Rochefort. So my question is, does anyone know definitively if Rochefort beers contain coriander or not? Some sources I found swear the spice is added, while others emphatically swear it is not. My guess would be that, even if one can imagine an orange aroma and flavor, that the beer does not contain coriander. My suspicion is that the aroma and flavors are byproducts of fruity yeast and a complex, high-gravity wort. Fueling the differing accounts, and I’m sure complicating matters, these monks don’t necessarily like to talk much, and especially when it comes to brewing secrets. So if anyone knows the answer, or even has an opinion, please add a comment.

For those interested in the beer I brewed on Sunday, below are the details.

After designing this beer, I compared it with the Dubbel recipe in Jamil Zainasheff and John Palmer’s book Brewing Classic Styles . My recipe was almost the same, all the way down to the grist ratios. So that made me feel better. If you do not know Jamil, he is a world-class homebrewer. He is on a different level in my opinion. I have great respect for him, and I found his book a great addition to my library.

A couple of final notes. Note, I did not use coriander in by beer. Also, before you try to brew this, you may want to contact me to find out how it turns out. It is currently open fermenting in an 8 gallon enamel pot in my basement. For those that are not aware, Wyeast 1762, according to numerous reputable sources, is Rochefort’s yeast. Since Rochefort is a beer dominated by yeast and malt/sugar flavors, having the proper yeast strain is a good start at a successful batch of beer. And when I open the lid to skim Kräusen, it definitely smells like fruity Rochefort yeast. Finally, the recipe above was mashed with a 20 minute protein rest at 122F, 40 minutes at 154F (until saccharification), at mashed out at 168F.
Posted by Cody Christman at 11:07 AM 2 comments: