I am back in the Big Sky for an 18 day tour through God’s Country. Every state has their own unique liquor laws, and Montana is no different. As a way to promote the craft brewing industry, the state legislature passed MT Law 16-3-213. This ordinance allows breweries to serve beer at a tap room without an expensive liquor license as long as nobody is served more than 48 ounces, and as long as they close by 8 pm. Most of these tap rooms are open from 4 – 8 pm and give their guests a three-punch card to keep track of the beer consumed.
One of my favorite tap rooms is Carter’s in Billings on Montana Avenue. It has a nice atmosphere with indoor seating right next to the open brew house. Space is tight because oak barrels full of sour and wild beers take up a good portion of the seating area. Carter’s is right next to the railroad and Mike (owner/brewer) just added on a small deck out the back door next to the tracks to accommodate more thirsty guests. Trains and brewing seem to go together.
Mike does not discriminate against nationality in his extensive list of offerings. He serves a Dort and Kölsch (Germany), Bitter and Mild (England), Farmhouse and Saison (Belgium), as well as great American styles like his Black IPA. In addition to the draft selections, patrons can also buy 750 ml bottles of Carter’s Saison for six dollars to take home. This is a real steal. I just finished his 2009 vintage, which is partially fermented with brettanomyces and is a bit drier than previous vintages that I have had. It is a very nice, floral and complex Saison. I recommend purchasing a couple bottles since they are so reasonable. Drink one now and lay the others down to see how they mature over the years. 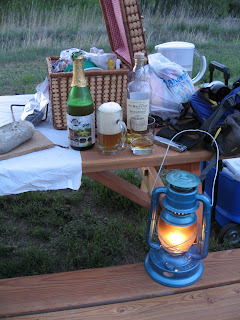 The picture I’ve inserted is from Walhalla – my property on the Yellowstone river. As you can see I was “roughing it” and did not have the proper glass to drink the Saison in, but the peace and tranquility of the open space and river made it taste just fine none the less.

After my stay in Billings, I headed to the mountains with my brother to do some hiking. Con has a plot of land at the base of Black Butte Mountain in the East Rosebud river valley. After a cup of coffee and some socializing with the locals that live in the area, including famous Native American artist John Potter, we headed up into the Beartooths for a hike up to Elk Lake. As a reward after finishing up the seven mile hike, we though we'd treat ourselves to a couple of drafts. So we packed up and headed toward Red Lodge to visit the Red Lodge Ales tap room. But most roads out of the Beartooths lead through Roscoe, and Roscoe is home of the famous Grizzly Bar. As we passed, we had to pull over. It is hard to drive by without stopping. Con and I had a quick Bent Nail IPA. Two beers cost us $3.50 – that is how you know you are in Montana! And for another $15 you can buy your own “Where the hell is Roscoe” t-shirt. It is a tiny blip off the road, but every good Montanan knows where Roscoe and the Grizzly Bar are. 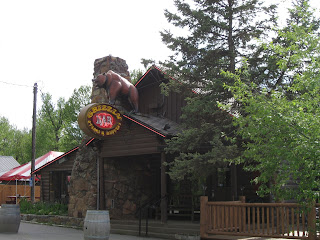 After the quick stop we finally made our way over to the Red Lodge Ales Brewery. Since I was last there a year and a half ago they moved a couple miles out of town to a new and much larger facility. The old tap room was a bit tight, especially since dogs often outnumber the two-legers. The new location is very open with a glassed-off view of the new 20 barrel system and bottling line. Strong demand required them to expand from their old seven barrel system. Most of the interior was made out of scrap material off of an old family barn and the decor has a nice retro/modern feel. Outside there is also a patio and grass court where people can eat, drink and play frisbee under a beautiful mountain backdrop. Red Lodge Ales is technically not a tap house. They have a tavern license which allows them to serve more than three pints and stay open later like a more traditional bar. 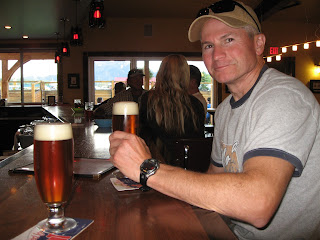 I sampled their Maibock, which was honey colored with a big malty flavor and a pleasant dry finish. A nice, clean, strong lager. I also enjoyed a pint of their nitro tap Porter. The nitrogen pour made this a very smooth beer which tasted sweetish – almost like lactose had been added in the boil. I also detected a hint of vanilla. Dark, smooth and tasty. Stop by if you are in the area. Red Lodge is about an hour south of Billings, and the brewery in on the right before you get into town.
Stay tuned for more to come from Bozeman…
Posted by Cody Christman at 4:29 AM