The 21st annual Colorado Brewer’s Festival was last weekend, and I must admit that I was a bit nervous about this year’s new format. Apparently the Old Town Fort Collins merchants had grown tired of the wildly successful and crowed CBF. Rowdy and intoxicated attendees were causing problems and, surprisingly, their business was down over CBF weekend. The merchants claimed attendees were not patronizing their stores and were scaring off other would-be shoppers. So this year the event was moved a couple blocks from Old Town across College to Civic Center Park. There were also other changes. Instead of an entry fee and individual drink tokens,


there was a single ticket charge, which allowed the attendee to drink as many 4-ounce samples as he or she desired. There were two sessions on Saturday, noon to 3 pm and 3pm to 6pm, and one four hour session on Sunday starting at noon. And ticket sales were limited to keep the crowd down. The group I was with attended the Saturday noon session. I must admit that I was not ready to move on after 3 pm. People with the early session tickets were allowed to stay in the Civic Center Park area, but could not longer sample beers at the brewery booths.
With all of that said, the new format was better than I had feared. Laporte Avenue and Howes Street are lined with mature trees and

provided a nice atmosphere. I still prefer Old Town, but it was better than expected. And the crowd was noticeably smaller than in the past. Lines at the brewery sample stations were almost non-existent which was very nice. There were still bands playing during the event, but a bit out of the way. Not quite as nice as the central band location by the pond in Old Town. Still the event offered 58 beers from 32 breweries (basically the same as last year) and a nice atmosphere to sample many of Colorado’s finest offerings. If the event moves back to Old Town, I would be fine with that, but we’ll be back next year regardless. Whether or not you would like the new format probably depends on if you like festivals with big, rowdy crows or a quieter setting with no lines. 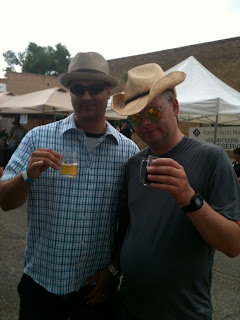 I sampled around 20 beers, so I cannot report on them all, but one beer of particular note was Odell Brewing’s St. Lupulin. The name screams “hop bomb,” but that is not the case. St. Lupulin weighs in at a sturdy 6.5% abv, but packs only a modest 46 IBUs. To compare, Odell’s IPA contains 60 IBUs. According to the representative, the concept of St. Lupulin is to focus more on hop flavor and aroma and be less bitter. This is a fine line to walk, because hop aroma accentuated beers still need a solid IBU backbone to avoid being one-dimensional. But Odell created a very nice balance for those seeking flavor and aroma and a smooth, balanced malt/hop backbone. It is a seasonal summer ale, and I was surprised how refreshing it was, especially given the relatively high alcohol content. Give it a shot if Odell is distributed in your area. 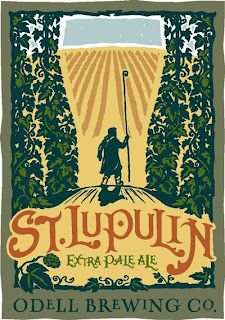 One final note. There are always vendor booths lining the streets of CBF, and this year was no different. As my friends and I saw an interesting tent for a new company called BrewClick, we wanted to check it out. Interestingly enough I stumbled across an old friend, Julie Hull, who I had not seen in years and is now working there. It was good to catch up with Julie and I promised that I would hit their website. Their portal includes beer news, brewery profiles as well as other interesting beer related information. I asked them for a paragraph to include in my blog. According to Brew Click’s Chief Marketing Officer, Kris Erlewine:

“BrewClick.Com is an Internet portal designed to collect
highly-targeted consumer preferences for beer and to match those
preferences with specific offers from Breweries, BrewPubs, Liquor
Stores, Distributors, Bars and Restaurants. By completing preferences,
consumers are able to receive offers that exactly match their
interests. Vendors are able to effectively market on a one-to-one
basis.”

I figured I would learn more so I signed up for their “Local Hops”. If you are interested you can learn more about their services at brewclick.com.
Posted by Cody Christman at 8:41 AM