Horse-Drawn Wagons and Another Pro-AM

On Friday, April 16th the Wynkoop Brewing Company made history. For the first time in almost 100 years, the Koop delivered kegs and cans of beer to LoDo bars via horse-drawn wagon. Now it is not uncommon to see draft horses pulling meticulously decorated wagons with massive oak kegs in Bavaria, especially during Volksfest season, but here in the states this is rare. The Wynkoop wagon is a bit more modest than what one finds at Oktoberfest, but it truly fit in with the western heritage of Colorado. Local historians say beer has not been delivered like this in Denver since 1915. 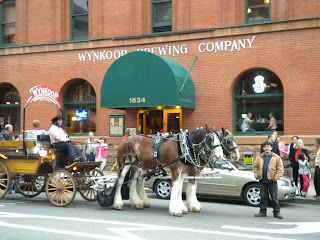 Don’t feel sad if you missed it – this was not a one-time gimmick. If you want to witness history you can see it again every 2nd or 4th Friday of each month. Get to the Brewery before 6 pm so you don’t miss the action. Heck, get there by 4 pm and warm up. 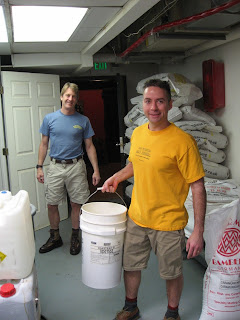 In other news, I was back in rubber boots and gloves at the Wynkoop to brew another Pro-Am beer with head brewer Andy Brown. Actually this time we had a little help. None other than the CEO and Chairman of the Board of the Wynkoop Holding Company, Lee Driscoll. It is great that the big boss is involved and interested enough to show up on brew day. And what a brew day it was. Andy and I concocted a Quad based on a beer I took first place with at a BJCP certified competition. For an 11-barrel batch we used over 1000 pounds of base malt, plus additions of Munich, Cara Munich, Special B, and over 150 pounds of dark Belgian candy sugar. The original gravity was over 25 plato! (over 1.100) To attain this density we could not sparge the beer. The mash was conducted in a 20-barrel mash tun with 12 barrels run off, which were then boiled down to 11. This beer will have plenty of time to mature before September’s GABF – and it will need it. Wish us luck!

I’m off to Montana soon and hope to keep you up to date on beer happenings in Big Sky Country. Aufwiedersehen.
Posted by Cody Christman at 12:07 PM