I was lucky enough again this year to collaborate with the Wynkoop on a GABF Pro-Am entry.  For those of you that are not aware, The Great American Beer Festival is the world's largest beer event (based on number of beers available) and takes place every fall in Denver - this year October 10-12th. (http://www.greatamericanbeerfestival.com/) A few years ago the GABF added a new "Pro-Am" match up. This competition allows homebrewers to partner with a craft brewery to scale up one of their BJCP-certified award-winning beers. Out of the 3,000+ beers available at the GABF, there are only 100 Pro-Am entries.  Those 100 are judged against each other for gold, silver, and bronze medals.  In addition, the winner is eligible to compete against all of the other beers at the GABF for best in show. 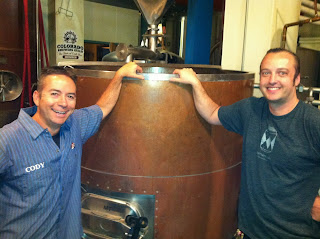 Last year my homebrewed Saison took first place at an American Homebrewer's Association's (AHA) sanctioned competition. After winning, I hit up Wynkoop brewmaster Andy Brown to see if he wanted to enter another Pro-Am.  Andy and I have collaborated on two of these in the past - a Dunkles in 2009, and a Belgian Quad in 2011.  Our Dunkles turned out excellent.  The Quad, on the other hand, never quite made it to the GABF.  This massive beer could never quite attenuate in time to make the September deadline.  So now, years later, it is still aging in brett infused oak barrels in the Wynkoop cellar drying out and working up more character.  (When it hits the tap, I'll let you know.)

Belgian Saison is a broad category of beers with roots in Wallonia - the southern, French-speaking part of Belgium.  Saisons range from golden to amber, light to strong, spiced to unspiced.  But most are dry and highly carbonated.  Another characteristic I would assign to the Saison style is, like many other Belgian ales, it has a strong yeast character.  Yeast selection and how those yeast are handled often defines the finished product. 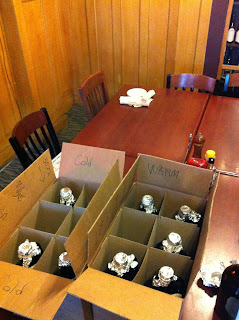 Since yeast character was so critical to the beer we were looking to produce, Andy suggested we partake in a yeast experiment to identify the perfect strain for our Pro-Am entry.  We split up scouring different yeast suppliers for various Saison, Farmhouse, Biere de Garde, and Ardennes strains.  In the end we had rounded up seven different varieties.  One Friday after work I headed to the Wynkoop as usual.  That day Andy had brewed a light wort for one of their beers, and pulled off 14 one-gallon jugs of the sweet liquid for our experiment.  After I arrived, we got together and pitched half of each strain into two jugs - one to be fermented warm, while the other cool.

Two weeks later the test batches had fermented out and it was time to sample each and seek out the starter with the best character for the type of Saison we were shooting for.  It is worth noting that temperature has a profound impact on how yeasts behave.  It changes the concentration of phenols & esters, impacts turbidity, influences color, and alters attenuation - to name a few qualities.  It definitely was a learning experience for me.  These are things I already knew, but never had the resources to attempt a yeast experiment on this scale. 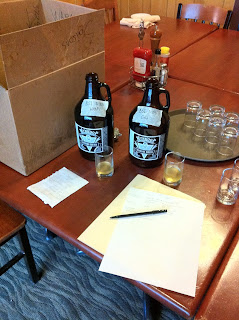 After Andy and I both sampled and took notes on each of the 14, we selected the "French Saison (S-11)" strain from one of the Wynkoop's commercial suppliers.  The warmer fermented batch was preferred by both of us.  I do not know with 100% certainty, but I think it is safe to say this strain is similar to Wyeast's 3711.  With that said, even the same single cell source can morph over time once split among suppliers.  To sum up - our yeast had been selected.

As most of you know, I tend to be a fan of simplicity.  Some of the best beers in the world are single malt (Helles, Dunkles, etc.), and/or single hop beers (Saaz for Pilsners - as an example).  Plenty of complexity can be achieved with simplicity.  Well... this recipe runs contrary to that line of thinking.  Sometimes there is nothing wrong with brewing one of those "everything but the kitchen sink" type of beers.

My Saison was inspired partially by Karmeliet Tripel, which employs three cereal grains in the mash - barley, wheat and oats.  I also used these three grains, as well as a number of specialty malts to round out the grist.  This recipe has a little bit of everything.  Here it is (scale to your system and needs):

So how did our Pro-Am experiment turn out?  What does it look like, smell like, how does it taste?  Not telling!  You'll have to judge for yourself.  This beer will be on tap Saturday at the GABF Pro-Am section (usually right up front near the entry), and it will also be available at the Wynkoop until supplies last.  I hope you get a chance to sample a few, and I welcome your feedback.  Enjoy!

Posted by Cody Christman at 5:38 PM