Last week my wife and I returned from a trip to Europe.  On this vacation we spent a majority of our time in idyllic Italy.  A visit to Italia has been on our list for over a decade now, and we finally made it happen.

I must admit the trip was not planned around beer - rather sightseeing, history, and leisure, but like all of our travels beer ended up in many of our activities.  So with that said, this blog is not based on extensive research into the Italian beer culture, rather a more passive, tourist's perspective on the scene.

In preparation for our trip I naturally started reading up on Italy, as well as solicited advice from friends that have been there before, and in one case born and raised there.  I knew that wine was the undisputed drink of choice among Italians.  Italy is located squarely in the wine-belt.  (Tuscany is better suited to growing grapes than barley or hops.)  But I had also heard from many Italy-visiting-veterans that, like other parts of the world, the craft beer movement was taking hold there too. 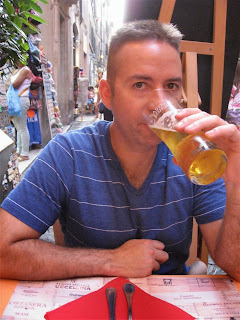 Our first stop on this trip was Rome.  Here is some background.  We worked all day Friday, caught an evening flight to Europe (Rome via Frankfurt), and arrived on Saturday afternoon.  After checking into our B&B we took the subway to the Spanish Steps and walked down to the Trevi Fountain.  After fighting our way through all the other tourists, we headed toward Piazza Navona.  Both of us were hungry, tiered, and thirsty, so we stopped at a quaint pizzeria in a narrow alley.  We sat at a small table out front, and after two long days we finally got a chance to relax.  This place really hit the spot.  The salami pizza we ordered was excellent, and never before has a Nastro Azzurro tasted so good!  We were hot and the beer was cold and refreshing.  Weather is a major influencing factor on local styles around the world - and Italy's Mediterranean climate steers people toward beers like Peroni.

This was my first impression of Italy.  Good food, friendly service, and a gold lager that was quite satisfying.  I must admit that I expected a city where everyone would be drinking wine.  I suspected there would be times when we may feel out of place.  (My wife does not drink much alcohol at all.)  But to my pleasant surprise, I saw as many people enjoying beer as Chianti.  Almost all restaurants had something on tap (typically Peroni or Moretti), and were more than happy to serve it with their fine cuisine.  No dirty looks or anything.  A pleasant surprise.

There was another interesting thing about Italian regulations that I quickly discovered.  When purchasing a bottle at the grocery store, or at a cart on the street, the merchant typically asked if I wanted it opened.  That is right, walking around with an open container is no problem over there.  This was actually very nice.  We could continue to do more sight seeing after dinner, with a beer in hand, and not worry about being questioned by the authorities.

One minor warning when purchasing beer - just be cautious of "Doppio Malto" beers that are ubiquitous at these markets and stores.  The name conjures notions of Doppelbock (think Moretti La Rossa), but many of them, some foreign, more closely resemble malt liquor (think Colt 45) than Salvator.  Otherwise, drink away and have fun getting lost in the maze of Rome's narrow streets.

One has to seek them out a bit, but there are excellent beer pubs and breweries hidden throughout the city.  You may have to pass several Trattorias serving mass produced lager to get to them, but they do exist.  My experience was that these pubs tended to cater to a younger crowd.  Some were "sports bar" themed, and some worked to attract tourists seeking out unique and specialty beers.

I admit, I spent more time at the Vatican and Colosseum in Rome than seeking out beer havens, so take my less-than-extensive-list of recommendations with a grain of salt, but there are a few places I would suggest visiting.  And the nice thing about Rome, these establishments are all walkable and not too far from the center of town.

After three days in Rome we rented a car and drove north into Tuscany.  We stayed at a picturesque winery on a remote hillside near Siena.  This location was our base for several day trips and excursions.  The countryside of Tuscany was beautiful, carpeted by vineyards and hilltops capped with medieval towns.  From Siena we made the winding trek through the scenic Chianti region that eventually led us to Florence.  Florence is another 'must see' town in Italy - renaissance architecture, famous museums, and a cultural center of the world.  Like most other famous Italian towns, it is also packed with tourists.   So after soaking up some art, history, and spectacular views from the top of the Duomo, we headed away from the masses toward the train station to the Mostodolce brewpub.

Mostodolce was buzzing with a young vibe and casual atmosphere.  (a few dogs too)  The bar opened onto the street making the place feel bigger than it was.  Technically it is not a brewpub.  The owners brew the beer outside of town and have the finished product trucked in for their thirsty guests.

Their menu provides detailed descriptions of several of their beers, though watch out because many of them are seasonals and may not be available.  Pay attention to the chalkboard left of the faucets for the beers currently on tap.  There were four when I visited.

My first beer was an A.P.A.  I asked the owner what that stood for and she said, "American Pale Ale."  I guess in some parts of the world, our hoppy Pale Ales have become so famous that "America" has replaced "India" in this style's name.   This beer poured a clear gold color topped with a cream head.  On the nose it had a fresh sent of light grain (Maris Otter?) with a sturdy hop backbone of citrus and passion fruit.  New Zealand hops dominated the flavor growing stronger and more pungent as the beer warmed.  The finish was crisp and long with more hop character and just a touch of diacetyl.  Overall well balanced.  What I would call a "light" IPA, but with hops from the southern hemisphere.  What about the name - APA?  Sounds fine to me.

My second beer at Mostodolce was their flagship English Bitter, Christian, named after the brewers' son.  I really enjoyed this beer too - a rich copper color, hints of caramel, earthy hops, minerally character, and a toasty finish.  This ale had a bit of everything.  In fact it was so well rounded, after reviewing my notes, the flavor wheel I scribbled was almost a symmetric circle - with only a dent/absence in the sour radius.

I spoke with the co-owner (pictured), and she said she and her husband are doing great business and intend to expand their distribution to other establishments.  So if you are in Florence, stop and check them out.  And keep an eye out for Mostodolce beers in other establishments too.

After leaving Tuscany and short visits in Cinque Terre (a must see) and Venice, we headed further north toward the Austrian border.  The number of breweries in Italy is rapidly expanding, and if you look at a map, you'll notice a disproportionate number are located in the north.  This is not a coincidence.  The terrain of the Alps and cooler temperatures lend themselves to beer.  History in the region also plays a significant role.

My wife and I spent a couple of nights in Kastelruth (Castelrotto) outside of Bozen (Bolzano) soaking in the awe-inspiring scenery of the Dolomites.  This semi-autonomous region, Südtirol, known as Alto Adige in Italian, is predominantly German speaking.  Südtirol was part of the Austrian Hungarian Empire until the end of the First World War when it was annexed by Italy.  The Third Reich left this province alone due to Mussolini's cooperation during World War II.  So there you have it... to this day Austro-Bavarian people living in Italy.  Today, this region is seeking total independence.  The feeling appears to be somewhat mutual since most Italians I spoke with did not recognize this province as part of "real" Italy.  Nevertheless, Alto Adige is part of Italy. 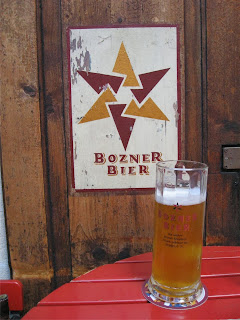 Culturally this region has much more in common with the German-speaking north than the rest of Italy to the south.  Not surprisingly, the beer scene here bears a similarity to that of Austria and Bavaria.  Many towns have their own breweries, and the beers tend to fall into more standard styles that would be expected north of the Alps.  Styles such as Pils, Helles, Dunkles, Bockbeir and Weizen.

The Forst brewery is quite popular in the region.  In their hometown of Meran (Merano) they have a large Biergarten.  Their beer can be found allover, including Restaurant Forstbräu in Bozen.  This gastropub is across the street from Hopfen & Co. - the home of Bozner Bräu.  Around the corner from these two beer havens is the Paulaner Stuben restaurant.  As you can see there is heavy concentration of good beer in central Bozen.

My wife and I pulled up a table out front at Hopfen & Co.  Our seats offered great people watching.  There was a bakery stand on the street directly in front of us selling all sorts of fresh goods including large pretzels.  A perfect accompaniment to the great beer we were drinking.

My first round was a Bozner Bier Helles.  A Helles it was, though more specifically I would put it in the Kellerbier category.  It was a hazy light-gold color (unfiltered) with a beautiful fresh decoction mash aroma.  It had a slightly fruity character from the malt and a light, sweetish finish.  Very enjoyable.  My second round was their Dunkles, which was equally enjoyable, though I failed to take any tasting notes.  Before moving on I had to try their Weizen, served in the traditional Weißbier glass, and also tasting very traditional - true to style.

You can find great beers in Italy

This concludes my not-so-scientific observations of the Italian beer scene.  No, Italy is not Colorado or Franconia, but few places are.  Whether it was a mass-produced light lager on a hot day, or a Hefeweizen up north, I really enjoyed my beer drinking experiences on the boot.  If you get a chance to visit Italy, make sure and indulge in fine cuisine and excellent wines.  And don't forget that good beer can also found... even in this country squarely in the wine belt.  Enjoy.