Colorado now has over 120 craft breweries, and it seems like every month another one opens. Is there a market for all of these new breweries? Is there room for even more? It is definitely getting harder to make one’s product stand out in an already crowded liquor store beer rack. But Coloradians love their beer, and in Denver people love their neighborhoods. So when it comes to neighborhood brewpubs - not concerned about mass distribution - there does seem to be space for newcomers.

I recently visited the relatively new Denver Beer Company, which opened in August. This fine new craft brewery is located on Platte Street west of downtown and serves the Platte River Valley and Highland neighborhoods. Denver Beer Company was opened by Charlie Berger and Patrick Crawford. I’ve known Charlie for years from his time as a brewer at the Wynkoop. He is definitely one of those fun loving, gregarious people that is just a pleasure to be around. 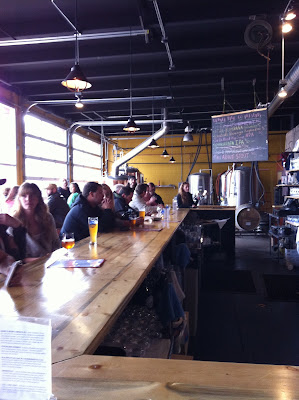 He also knows his beer. Charlie attended the Siebel Institute of Technology and the Doemans Brewing Academy in Munich, and has earned his International Diploma in Brewing Technology. For those that attended SBM XVIII back in June of 2010, the “Hoppy Bunny” I served was a specially-dry-hopped blend of 2/3 Olde Rabbit (brewed by Andy Brown and I at the Wynkoop) and 1/3 “Charlie Wine”, a very strong Barleywine concocted by Mr. Berger.

Better use for an auto repair shop

The new neighborhood brewery is located in a renovated 3,400 square foot auto repair shop. To fill the void, Charlie and Patrick traveled out to Newington, Connecticut to purchase and pick up a used seven-barrel system from an old “Hops Grill” brewery that closed. Back in Denver on Platte Street, the tap room and brewery share the same large open space. When I arrived late on a Saturday afternoon there was that unmistakable humidity in the air and the wonderful smell of a fresh mash. Though packed with locals, there is plenty of room for everyone given the generous amount of floorspace. It is a unique atmosphere. In addition to the brew system in the back of the building, there are also oak barrels shoved against the walls here and there. Some of the old hydraulic lifts from the building’s auto repair days are still used to hold up tables and one corner of the bar.

There is a “beer garden” in front of the building along the street with a number of picnic tables. The large auto garage doors were closed when I visited, but open up to unite the indoor crowd and beer garden dwellers during warm days. Large, soft Bavarian style pretzels are served inside the pub, while a private food cart out front serves larger snacks outside.

And yes, the beer is good too! If you’re like me you typically look over a brewery’s web site before visiting to get a feel for what they offer. Don’t spend too much time doing that with The Denver Beer Company. They did not have a single beer on tap that was listed on their web page. To date every beer they have brewed has been unique. I’m sure at some point they will settle in and serve a few regulars in addition to the one-off beers, but for now it is a free for all. (in a good way)

I sampled their Hefeweizen, NPA (Neighborhood Pale Ale – locals provided homegrown hops), Stout and Whakapapa IPA. The IPA was my favorite. Whakapapa is a Maori word for “layered.” In this case layered… as in hops. (And yes, one of the hops came from New Zealand) The clear gold color was a bit deceiving. The beer was not clean at all having a pungent, sticky, resinous and very piney flavor, which led to a pleasant, lingering hop finish. The beer was brewed with US, German and New Zealand hops. It was definitely not one-dimensional and picked up flavors from the various hop additions from around the globe. It was a unique IPA that hop-lovers will enjoy. That is if there is any remaining.

So is there room for any more breweries in Colorado? If they are like the Denver Brewing Company, I believe so. And judging from the large crowd of locals, this new brewery will not have any trouble being successful.
Posted by Cody Christman at 11:48 AM