Earlier this month I returned to God’s Country to visit family and take in the MSU Homecoming weekend festivities. I took the short flight from Denver to Billings and, as usual, my parents were waiting for me in front of the airport. From Billings Logan we proceeded directly to the Railyard Ale House (A great music and craft beer establishment owned by my parents and managed by my Nephew) to check out what was new on tap. Shortly thereafter we wandered across the hall to Carter’s Brewery (they share the building) to sample some of Mike’s Belgian specialties. A great way to start off my trip.

On Friday my father and I suited up and headed out to Bozeman. We arrived in the late afternoon via the Main Street exit off of I-90. The town was decorated with blue and gold and already buzzing with excitement. I was also excited, because this was to be my first look at the “new” Rocking R Bar. 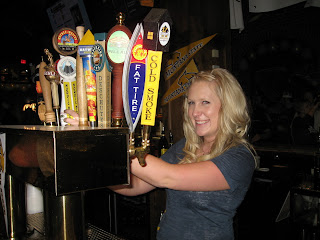 For those who are not familiar with the history of the Rocking R, it has gone thorough some renovations and seen some tough times. On March 5th, 2009 a massive gas explosion completely destroyed the R-Bar and surrounding buildings, and much of the historic city block. Tragically one young woman lost her life in the early morning disaster. The scenes out of Bozeman that day were surreal. Freezing cold temperatures, ice, steam, smoke and fire – and a chunk of downtown destroyed.

Since the accident the affected section of Main Street Bozeman has been blocked off – that is how I last saw it after being back for Homecoming last year. But a few months ago, on July 26th, the R-Bar reopened. On the drive through town, it was good to see the new development rise from the rubble. The R-Bar is back. The restaurant Boodles, which was also destroyed, has been replaced by Santé Fe Reds, which moved into downtown from its old location on North 7th Ave. (Did they trade places? I think the R-Bar moved over and Reds is where it was.) The other interesting thing is that it is difficult to distinguish one establishment from the other. They look similar from the front, and Rocking R branded sandstone adorns each side of both establishments. They are not linked in any way. I’m not sure how the R-Bar pulled off that marketing feat. 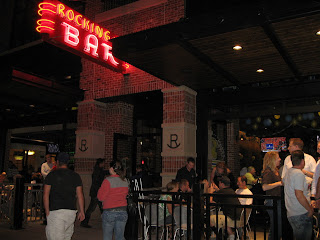 Now for some additional history. Despite what current MSU students call it, the R-Bar before the explosion was not the “old” R-Bar. To me the old Rocking R was the lovable dive that existed before the first renovation in 1998. The “real” old R-Bar smelled like a stale-beer soaked men’s locker room. After the 1998 renovation, it reopened and was considered too nice by most regulars. They served calamari for appetizers, and the bathrooms actually had real plumbing. Where had all the good times gone?

Well, the “new/new” R-Bar is even nicer yet. From a beer selection standpoint, things have changed since I was in college. The Rocking R now serves classics from around the globe (9am on Homecoming morning I always start off with a Guinness), as well as wonderful Montana specialties from breweries such as Kettle House (Cold Smoke Scotch Ale), Lone Peak (Nordic Blonde) and Yellowstone Valley Brewing (Huckle Weizen). Of course you can still order a draft Schlitz too. The old/old R-Bar was much more famous for quarter beers and pitchers of Kamikazes than craft beer… which they did not serve. So the new beer selection is one big plus. And now the front of the Rocking R opens up to the sidewalk. Main Street Bozeman has changed over the years. It now has a very electric feel like Lodo in Denver or the Gaslamp district in San Diego. (Smaller and Montana-style of course.) The street is packed, and people drinking at The R are now part of it. And it is difficult on Homecoming Weekend to have a beer out on the sidewalk and not know every third person that walks by. It is a very nice addition having the bar open out on to the street. If you have not been back to visit the new Rocking R, try to get there before the weather turns so you can enjoy a drink outside.

For those that still long for R-Bar 1.0, I’ve listed some songs from the famous jukebox. (Thanks Countryman!) For those that spent any time there, this list should bring back memories of playing pool and bar fights.

Where there any others? I don’t think so… 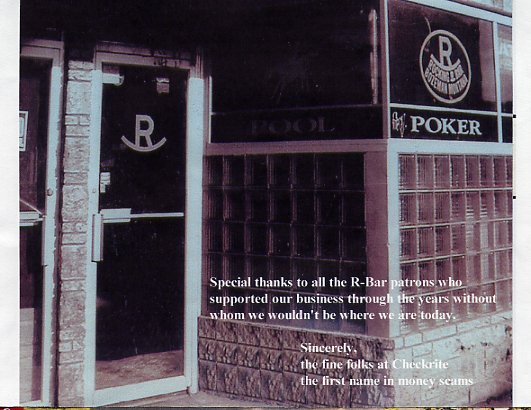 Posted by Cody Christman at 1:01 PM