Last week my wife and I visited the Napa Valley for my Aunt and Uncle’s 50th wedding anniversary. While in the area I took the opportunity to pop into one of the local breweries - the Silverado Brewing Company. The Napa valley is primarily known for its superb wines, not beer, but as Silverado’s slogan goes, “it takes a lot of great beer to make good wine.” In addition to Silverado, there are two other breweries in the valley – the Napa Smith Brewery (Napa) and the Calistoga Inn Restaurant & Brewery (Calistoga). Silverado is located between those two on Highway 29 two miles north of St. Helena in the Freemark Abbey Winery building. (Though not connected in any way to the winery.) 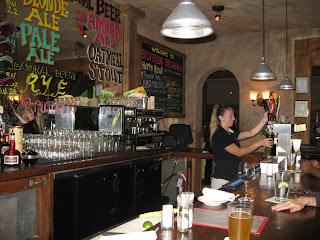 There are three areas at Silverado where patrons can enjoy their handcrafted beers - in the restaurant, which features fresh, local and seasonal ingredients in their dishes, bellied up to the bar, or they can sit outside in the shade of a massive California live oak. Silverado Brewing is known as a local hangout featuring good food, reasonable prices, and frequented by many prominent local wine makers.

As usual I started with a sampler tray of their six offerings. This included a Blonde, Brunette, Rye, Amber, Pale Ale, and Oatmeal Stout. Years ago their Brown Ale was renamed “Brunette” so the blond on the tap handle could have a dark-haired companion. I enjoyed all of their beers, but my favorite was their Pale Ale. (5.67% abv / 55 IBU) This American Pale Ale is made with pale, rye and crystal malts, and hopped with Chinook, Cascade and Challenger. It was copper in color with a subdued, citrusy nose. The rye twang and crystal sweetness gave way to a solid hop backbone, but not nearly as heavy handed as many American Pale Ales. There was a pleasant touch of diacetyl in the finish. A very well balanced ale in my opinion.

I thought it was interesting that three of their six beers contained rye malt – their Pale Ale, Stout, and obviously their Rye. I also detected diacetyl in most of their beers. This house flavor could result from their yeast strain or perhaps their fermentation process. Also, manager Jennifer Baum noted that their Blonde Ale, though not certified, contained mostly organic ingredients. Silverado is working on getting organic certification for their beers. All beers are brewed on their 10-barrel system, which is visible from the bar. Tours are available seven days a week at 11 o’clock.

While in the Napa Valley you have to visit some wineries. The atmosphere and smells alone are worth the visit in my opinion. And when you are ready for a break from wine, visit one of the three breweries in the valley, or pop over the hill to Santa Rosa and visit Russian River Brewing.

On a personal note

Not to toot my own horn, but… toot, toot. Last weekend my Germany Roggenbier, named Liquid Pumpernickel, took best of show in a BJCP certified competition. I rarely enter competitions, so when I do it is nice to get a positive result. For those of you that attended SBM XVIII back in June, you got to drink this beer... if you arrived early enough.
Posted by Cody Christman at 11:59 AM