Flüssiges Brot is one of the terms Germans use to describe beer. (liquid bread) And for the most part, beer is very much like bread. When it comes to freshness, most beers are intended to be consumed as soon as possible after they are made. Just like bread, fresh is better. Once the brewer filters and packages his/her beer, it will only diminish over time. Even some bottle-conditioned beers are intended to be drank immediately. One example I can think of is Hefeweizen. Weißbier yeast are very temperamental and definitely change the character of the beer over time. When a Weißbier brewer distributes his/her beer, it is at its peak and intended to be promptly enjoyed.

With all of that said, there are some beers that benefit from aging. Some are even intended to be “laid down.” Most examples of this fall into the category of very strong bottle-conditioned ales. Unpasteurized, bottle-conditioned beers are still alive, and the yeast will continue to slowly work away for years when subjected to the proper conditions. And the character of the beer will continue to change over time. When aging a beer, just make sure not to store it too cold. My basement fluctuates seasonally between 58 and 65 degrees, which is about perfect. A cool, stable temperature like this is ideal. 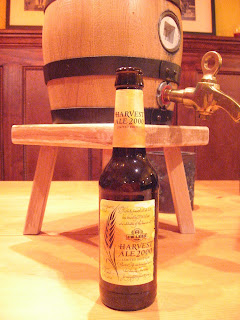 This leads into a beer I just had last night – J.W. Lees Harvest Ale 2000. This 11.5% abv beer was brewed on December 1st, 2000, so not quite a decade old, but getting close. I’ve enjoyed their Harvest Ale before, so I knew it would be a treat. I served the Harvest at 55 degrees to make sure no flavors were suppressed. It pours garnet with a firm, but short lasting tan head. (Probably due to the high alcohol content.) The nose is intense and packed with the aroma of raisins and caramelized malt sugar. Age only concentrates this characteristic of the beer. Full bodied, the flavor picks up where the aroma leaves off with very sticky malt and dried fruit notes. The alcohol is not dominant at all. Almost scary for a beer of this strength. The Nachtrunk lingers and slowly fades with toffee, malt sugar, and lots of raisin character. This is a wonder must-try beer! It is not a hop-head beer, rather a beer for lovers of old school strong ale. These beers can be hard to find, but if you do stumble across them, buy enough to set a few aside to compare tasting notes as they age. J.W. Lees also bottles special editions of this ale matured in sherry, port and Islay Whisky casks. I find these offerings to also be great, but I tend to like the original the best. (As much as I love smokey Whisky!)

My friend Chris Cross and I brewed a strong ale in November of 1998 to be consumed at the turn of the millennium called, appropriately, Millennium Ale. Over time that beer matured in a similar manner to the Harvest Ale. The older it got the more the yeast slowly added character to the spirit - with almost the same pungent raisin character. We did enjoy this beer on 1/1/2000, but we also hid a number of these bottles away. When the beer was over six years old I entered it in the AHA Nationals and it took first place in our region. Now we will usually open one bottle per year at the New Years gathering hosted by Joycelyn and I. Currently I only have one bottle left – so I have a big decision to make this year.

To sum up, don’t be afraid to lay down some of these strong, bottle-conditioned ales. There are many styles now from England, Belgium and right here in the U.S. that are well suited for this treatment. And take notes so you can track how these beers mature over the years.
Posted by Cody Christman at 12:14 PM