Down Under With Rikki

After a six-year hiatus I have finally made it back down to Australia. I am in Sydney for work attending the APAN conference, but I have had a bit of time to do some sight seeing, and to see an old friend. 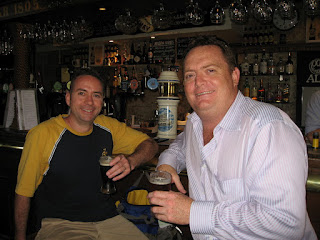 Back in 1990 two Aussies, Mark and Rikki (pronounced with heavy Australian accents), took Montana State University by storm. They exploited an imbalance loophole in the Australia/US University exchange program to “attend” school at MSU for one year. Without going into details, I assure you that these two were absolutely crazy! Among other things, they introduced us to rugby, surfing naked through bars, and Vegemite. (Which I initially found hideous, but am now addicted to.) Their stay was only one year, but the impact it had on the people they met in Montana extends to this day. When Joycelyn and I visited Oz six years ago Rikki lived right on Clovelly beach in Sydney. Since then he has moved and now lives with his girlfriend of ten years, Sam, and their two children a couple of hours south of town. Luckily, however, he happened to be in The City on Tuesday for work, which enabled us to hook up for a few rounds that night. We met at the Lord Nelson Brewery, which is located in Sydney’s oldest hotel on 19 Kent Street. (http://www.lordnelsonbrewery.com) Located in an old and quaint neighborhood in The Rocks, it is a tad off the beaten path, but a short walk from it. 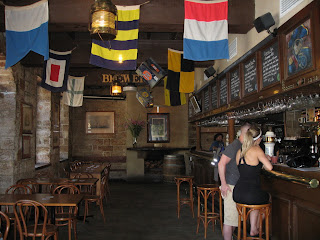 I was working my way through a few samples when Rikki arrived. He had not changed a bit. Rikki is as big as I am small. Solid as a rock, I would not want to go up against him on the pitch. It was great to see him again and catch up on old times. He also called Mark, who now lives in Perth, so we could chat for a bit. Mark was quite surprised to hear my voice when Rikki called from the pub and passed the phone me! As crazy as these two were, and to a lesser extent still are, they are both complete gentleman and all around class acts. Now their MSU friends are just waiting for the both of them to fulfill their promise to make it back for Homecoming some year. We’ll make sure and pre-post bail for that trip. Rikki had to head back home after a few pints to tend to his newborn baby boy, but I was very happy that my short notice trip worked into Ricky’s plans of being in Sydney so we could meet up.


A few notes about the Lord Nelson Brewery. The décor, menu, and selection of Ales are very much British. (I had a beef pie with mushy pees and mashed potatoes for dinner.) They offered six of their own beers, brewed on premise, but also did not shy away from the competition. A couple of Coopers beers were on tap as well as Pauline Helles and even Chimay! But I focused on their offerings. Below are a few notes on the three beers I sampled while there. If you’re even in Sydney, take the 10 minutes walk to get out of the tourist areas and head to the Lord Nelson pub.

Posted by Cody Christman at 6:59 AM