2010 Beerdrinker of the Year - Bill Howell 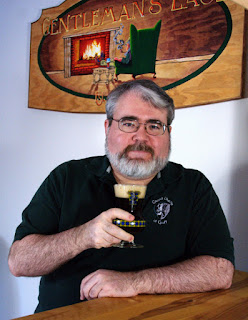 As the winner Bill will receive, among other things, $250 to spend at his home pub (St. Elias Brewing Company in Soldotna, Alaska), a beer brewed in his honor by the Wynkoop for next year’s competition, free beer for life at the Wynkoop Brewery, and worldwide recognition. It is always tough to not win, but Phil and Logan should be very proud of their performance too. Both were entertaining and exhibited great beer passion and knowledge. I really enjoyed spending the weekend with all three of the finalists.

This year was much less nerve racking for me than last year. Driving in from Golden to Denver with Joycelyn for the finals, all I could think of is how much of a mess I was last year. I’m relieved that I won last year on my first attempt in the Finals, and that I don’t have to be a contestant again. This year I was one of the six judges and did my best to help make the competition fun, educational, and tried to ask relevant questions. It was fun being on the other side with such a prestigious panel. (The other five judges were Andy Brown, Wynkoop Head Brewer, Jill Redding, Brewer’s Association, Tom Ciccateri, 2005 winner, Jamie Magee, Yankee Brewing News, and Rich Grant, Visit Denver.) Keep an eye out for more photos and footage of the competition that will come out in the next few days. Beertap TV was back this year filming, the Wynkoop will soon put out a press release, and there were a number of other press organizations in attendance covering the event. And once again, congratulations Bill!
Posted by Cody Christman at 5:15 AM