One of my favorite (non-beer) sayings is, "The French Impressionists were very talented at a technique known as French Impressionism." It is always fun to poke fun at the French. They are a people that are acutely proud of their culture and products - but for some reason they also make an easy target. I suppose one could also say, "French Brewers are the best in the world at brewing French beer." Obviously the French are much better known for their wine and cheese than beer, but they do make some good beer. And, as a beer lover, if you are interested in seeking out a French specialty, I recommend you take an atlas to the liquor store with you. France is located squarely in the wine belt, but its northern border with Belgium is an area of transition into the beer belt. In my experience, the further north the brewery (the closer to Belgium), the better the beer. 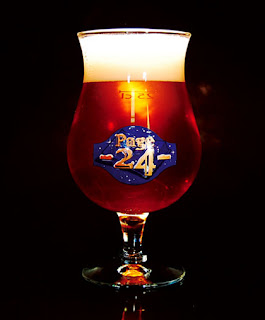 Surely some of that beer brewing brilliance from one of the world's greatest brewing countries spills over the border into northern France. This is somewhat ironic since over the centuries the Belgians have borrowed techniques from the French, which has led to some of worlds greatest beers brewed by them. The art of barrel aging and blending their beers were no doubt influenced by their southern wine-making neighbors. And many Belgian beers have characteristics closer to wine than beer - for example being dry and sour instead of malty and bitter. Belgium is at a crossroads between Germany, France and England, and their "anything goes" creativity is a product of local expertise and borrowed practices.

There is one broad beer category that straddles the border between Belgium and France called "Belgian and French Ales." This category includes the similar styles of Saison, Farmhouse Ale, and Bière de Garde. (Note however, it is always risky to try and categorize any beer from Belgium or its border regions.) Last weekend I had a excellent example of such a beer from this category - Brasserie St. Germain's Page 24 Noel from Aix-Noulette, France. Aix-Noulette is located in French Flanders just south of the western (a Flemish) portion of Belgium. French Flanders was originally part of the Courtship of Flanders in southern Netherlands. Over the years borders have changed, Belgium was created, and most of Flanders is now in Belgium while the southern section was ceded to France along the way. And unlike the Flanders region in Belgium, the inhabitants of French Flanders now speak, almost exclusively, French instead of Flemish.

Page 24 Noel is a 6.9% abv beer that falls into the Bière de Garde category. (The name means "keeping beer" - a beer usually intended to be cellared/matured) I was extremely impressed by this example of the style. It pours a copper color with a solid head and has an aromatic bouquet. Its flavor is well balanced with earthy, spicy, and fruity notes that transition into a mildly phenolic finish. All in all a balanced beer with great character. Brilliant!

The Page 24 Noel I drank was packaged in a ceramic swing-top bomber and came compliments of my beer of the month club. (http://www.beermonthclub.com) This beer may be hard to find in the U.S., but if you can get your hands on one, it is one great example of a wonderful French beer.
Posted by Cody Christman at 3:26 AM