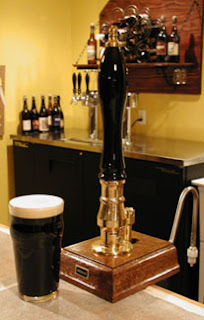 The Old Rabbit is an Old Ale made with an English Maris Otter base malt, lots of chocolate & crystal malt, along with Brer Rabbit molasses added with the first hops in the brew kettle. (hence the name) It is dark, rich, fruity and complex. People usually don’t know molasses was used in the brewing process unless I tell them. It lends a slight smokiness and caramelized sugar flavor to the Ale. Andy wanted to add his touch to this beer, so he renamed it “Auld Rabbit”… which made me wonder why I had never thought of that! The Rabbit is currently fermenting as I type and will be tapped around Valentines Day. I’m sure there will be plenty left for the 2010 Beerdrinker of the Year National Finals on the 27th. If you are in the Denver area, come down to the finals and experience the theatrics and fun of the event. And you can let me know what you think of my beer.
If you want to brew your own Auld Rabbit, start with Maris Otter, add a generous helping of English chocolate and 60 deg L crystal, and add 5% (by weight) molasses to the brew kettle. Make sure and use mild molasses and don’t get carried away with the addition, because it can easily be over done. Too much and your friends won’t even drink it! The hops play a secondary role in this beer, so use three additions at 60, 40 and 20 minutes (before the end of the boil) with an alpha acid/weight combination that will yield about 30 IBUs at the end. Shoot for an original gravity of 1.065 and use a well attenuating English Ale yeast. Serve it “warm and flat”, preferably from an authentic British beer engine. I hope to see you in February!
Posted by Cody Christman at 12:13 PM