After winning the Beerdrinker of the Year competition back in February, the event host and organizer, Marty Jones, told me that he and some friends get together a couple of times each year for some beers. And after reading about my basement brewery & pub in my beer resume, he wanted the gang to visit my basement. He went on to tell me whom this group included. 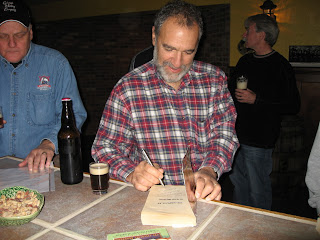 It was a list of who’s who in Colorado’s beer society. Marty’s group included Buddy Schmalz (head brewer at Dostal Alley Brewpub in Central City), Lou Cady (among other accomplishments, the man that originated the BDOTY competition), Dave Thomas (former scientist at Coors), Matt McAleer (marketing and sales at the Wynkoop), Dick Kreck (author & beer writer), and none other than Charlie Papazian (no introduction needed). I couldn’t believe it. A chance to have such an elite group, including the legend Charlie Papazian, in my basement! Well, it took us several months to coordinate, but last Saturday it finally all came together.

When this group gets together, their plans are not random – and this day they had three stops scheduled. They started at our house at 10 am. It sounds early, but the atmosphere in our basement was electric. In addition to the gang, I also invited about a dozen of my friends over. So there were lots of introductions, many samples consumed of the four beers I had on tap, and cameras going off like crazy. We hung out and discussed all things beer while drinking a couple of our own. And it was great to get feedback from these experts on my homebrew. All the reviews of my beer were favorable, and people raved about the Pilsner. “The best Pilsner I’ve ever had,” was the comment of one in the group – whose name I’ll leave out. You can imagine how proud I felt hearing that, and it was just wonderful having all of these people enjoy the fruits of my labor. 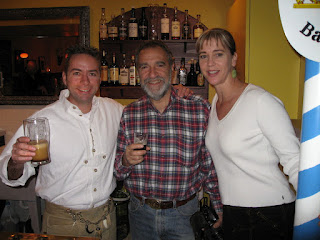 And in addition to what I had to offer, we also got to sample a gem brewed by Charlie Papazian. He brought along a bomber of a Rauchbier that he had brewed using a new applewood smoked malt. I know Rauchbier can be “love it or hate it”, but this masterpiece was well balanced and delicious! I guess nobody should expect any less from the father of modern day home brewing – and a person that still brews regularly. “You can’t use an overly attenuative yeast – a smoked beer needs a solid malt backbone,” Charlie said.

It was a wonderful reunion for the beer gang, and a great meet & greet for my friends, Joycelyn and I. And a couple of us took the opportunity to have Charlie to sign our wort-stained homebrew books. Charlie did not hesitate to sign the “Complete Joy of Home Brewing” book that Chris Cross and I purchased in 1990 when we both started brewing up at Montana State. “Cody, relax, don’t worry, have a homebrew” he wrote! I’ve enclosed a good photo of Charlie doing the honors. I was somewhat surprised that the beer gang was taking more pictures than my friends and I. They were loving it too. (I’ve attached a great picture of Charlie, my wife Joycelyn, and I.)

At noon it was time for the gang to migrate to their second appointment. To my surprise they invited me to accompany them – an offer which I quickly accepted. The next stop was a private tour at the Golden City Brewery. Owner and brewers Charlie Sturdavant and Jeff Griffith gave us a private tour of their surprisingly large brewing facility in a garage-looking building behind their carriage house tasting room and beer garden. The 30 and 40 barrel Unitanks were imposing, and I was especially impressed by the old-school brick jacketed boiling kettle. Every corner of the machine shop was packed with brewing equipment, including their hot liquor tank and a horizontal lagering vessel elevated on steel I-beams high above the brewery entry. Just the way a snug craft brewery should be. 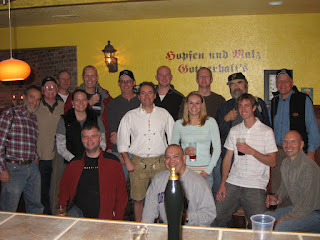 It is worth noting that when one travels with Charlie Papazian to any beer related outing, they are treated like royalty! We were very well catered to and received excellent treatment by the Golden City Brewery. Every question to Charlie Sturdavant and/or Jeff was answered in detail, and both of them dug into their private stockpile to provide us with samples of seasonal ales still in fermentation, experimental beers, and other gems in their stash. In addition to traditional beer, they also offered a couple of sour beers and two bottles of mead. Thanks guys!

It was tough to leave the GCB, but we had an appointment at Coors. Through a connection in the group, we were privileged to have a private tour of Coors’ pilot brewery by one of the brewers there. (The pilot is now also serving as the AC Golden Brewery.) Coors’ Golden facility is the world’s single largest brewery, and it was fascinating to tour their pilot brewery – a scaled down setup that sits above and overlooks the main, massive Coors brew house. With that said, we all promised we would not provide any other information about this visit. (Though no classified information was provided to us.) So I will leave it at that. 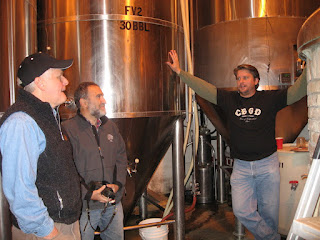 So in less than one day we toured the 1st, 2nd, and 3rd largest breweries in Golden, CO! And I had the opportunity to meet some true beer legends. It was really a wonderful and enjoyable group – each and every one of them. Marty, Lou, Charlie, Dave, Buddy, Dick and Matt. And it was a homebrewer and beer lover’s dream to meet Charlie Papazian. He is the person that started everything that we, as beer lovers, now take for granted. His 1984 book “The Complete Joy of Home Brewing” has sold almost one million copies and started a home brewing revolution. A revolution that grew into the craft beer movement that flourishes today. When he authored the first edition of his book there were less than 70 breweries in the U.S., now there are over 1500. And as the founder of the Association of Brewers and the American Homebrewer’s Association, and the person that made home brewing simple, fun and good, we’ll all owe him a lot of gratitude. Thanks for everything Charlie, and it was a pleasure sharing a couple of beers with you.
Posted by Cody Christman at 12:32 PM