I just returned from a business trip to Houston where I attended an IPv6 conference. I don’t know the town very well since I’ve only been there once before, but on that first trip I did manage to find some great beer culture in the Lone Star state. I had the pleasure of visiting the famous “Ginger Man” pub in Houston’s Rice Village near Rice University. It was one of Michael Jackson’s recommendations, and a couple of coworkers and I got the chance to check it out. It did not disappoint. It is a cozy pub with a beer selection much bigger than its humble structure. The Ginger Man was definitely worth another visit, but my schedule on this visit didn’t allow me to make it back. 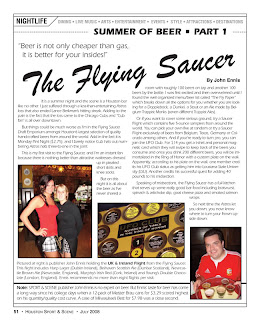 Unfortunately I didn’t get back to the Ginger Man, but I did find another gem. I was staying in downtown Houston at the Magnolia Hotel, and right around the corner was a pub called the Flying Saucer. (On the corner of Capital and Main Street – more information can be found on their web site: http://www.beerknurd.com/stores/houston.) “Flying Saucer” doesn’t really scream beer, but a local claimed it was a must visit for beer lovers. So a few of us from the conference thought we’d check it out. The inside of the Flying Saucer has a very open, yet a quaint and comfortable pub feel adorned with lots of beer paraphernalia. There is also a small beer “garden” out front. Their hook appears to be a mix of a nice beer-centric atmosphere, cute waitresses wearing short skirts, about 100 great beers on tap, and even more classics in the bottle. So if you’re in to those sorts of things, you’ll probably like Houston’s Flying Saucer! In addition to great beers, they also have the best selection of meads, ciders and perry that I’ve ever seen. There is a little something for everyone and any taste.

We arrived at 6 pm during happy hour and the place was packed with an electric atmosphere. After unsuccessfully searching inside for a seat, we spotted a young man sitting alone outside who was nice enough to let the four of us invade his table. We all had several beers as well as dinner. (Basic pub food – I had a French dip served with Guinness au jus and pub fries) Four hours of drinking along with our meals only cost $130. So the prices are surprisingly reasonable too. At 7 pm they offered a special in which they were selling half liters of Schneider’s Edelweiss. In addition to the wonderful Hefeweizen it contained, you got to keep the custom Edelweiss Sahm Krug it was served in. Luckily TSA did not give me any grief in the airport getting this souvenir back home. It will make a nice addition to my Stein collection.

I have to say my favorite part of the Saucer’s offerings were their beer tasting flights. They offer German, Belgian, and Texas flights, as well as a “build your own.” They will pour any five of their tap beers for a custom sampling. Very nice! I worked up one of these custom flights for Tim (Pilsner Urquell, Fuller’s ESB, Franziskaner Hefeweizen, Paulaner Salvator, and an IPA - the name of which I forget), and I had, among other beers, the Texas flight. I knew this before, but it was nice to reaffirm that Texans know how to brew beer! I was pleased by all five offerings, but I was particularly impressed with Live Oak Brewing Company’s Hefeweizen. (Austin, TX) A very good U.S. representation of the Bavarian specialty.

So if you are ever in Houston I recommend a visit to the Saucer. They have 13 other locations, all of which are in the south. (Maybe why I had never heard of them.) I can’t vouch for all of them, but if they are anything like the one in Houston, they are worth a visit. And don’t forget the Ginger Man too. Michael Jackson’s recommendations never disappoint. (You can find more information about the Ginger Man at http://houston.gingermanpub.com.) Houston may not be known for its beer, but I’ve never had a problem finding great beer culture down there. Do you have any other suggestions for that area? If so please add a comment. Hopefully I’ll make it down there again some time soon.
Posted by Cody Christman at 1:32 AM