The Wynkoop - my home pub

“Never before have the stakes been so high.” Those were the words Marty Jones, the MC and competition organizer, used to introduce me at the Beerdinker of the Year finals on February 21st. The winner gets, among other things, free beer for life at the Wynkoop Brewery in Denver, Colorado. Three Coloradans had previously made the finals, but none had ever won. And none of them were Wynkoop regulars like I am. All previous 12 winners 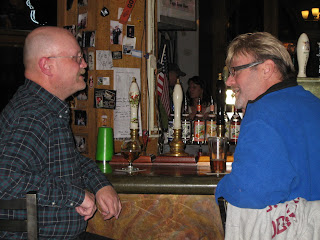 were from coastal states, so that prize is not something they can enjoy weekly! The fact is, I’ve always wanted to be the BDOTY, but not for the free beer. I think it is a huge honor, so I wanted the title as a matter of pride. That is what drove me to enter the competition in 1997, 2005 and this year. And I couldn’t be more excited that I won. With all of that said, the free beer is a nice perk that I will gladly make use of. This blog entry is about Wynkoop, where I just finished enjoying a couple free beers.

For most craft beer lovers, the Wynkoop is on the map. Partly because it is a great brewery, many beer authors have written about it, it has a great history, and partly because they sponsor the annual BDOTY competition that receives national press. When beer lovers descend on Denver every fall for the Great American Beer Festival, out-of-towners usually make at least one stop at the Wynkoop.

Current Denver mayor John Hickenlooper (as well as Mark Schiffler, the late Russell Schehrer, Barbara McFarland, and Martha Williams) opened the Wynkoop in 1988. To do so he (and others) had to lobby the State legislature to change the law to allow for microbreweries and brewpubs in Colorado. That effort was successful. So when the Wynkoop opened in 1988, at that time located in the middle of nowhere, it was the first craft brewery in Colorado. Now the state boasts about 100 breweries, more than any other except California. And the Lower Downtown (LoDo) district of Denver, where the Wynkoop is located, is now in the heart of the city’s business, entertainment, restaurant, brewery and sports areas – in strong part due to the tremendous vision of Hickenlooper and the other founders.

The Wynkoop’s ongoing success is based on great beer, perfect location, a wonderful atmosphere, and a knowledgeable and friendly staff. It is a place where I have always felt at home. So now it seems like a good time to talk about their beer. The heart of the Wynkoop’s beer selection has always been British, cask-conditioned ales. It is probably the first thing one notices when walking in the door – six Angram handpump beer engines. The ESB and IPA are always on cask, and a third, and sometimes forth, cask beer rotates. Last Friday the Sagebrush Stout was on cask. (not enough room on the sign to make the list – see my photo) But they also offer a variety of other styles. Note the two lagers on tap (the Pilsner and Schwarzbier), the German style Weissbier, a Belgian style Tripel, and a truly American offering – Patty’s Chili Beer. The Wynkoop exemplifies all that is great about craft brewing in America. Take the best beers from Germany, England, Belgium, etc., sometimes add a local touch, and add in some new American creations. And not just a great selection, but also a huge selection. Fourteen beers are currently on tap – all brewed on premises.

My first beer of the night is always the ESB. It is cask-conditioned, easy drinking, and full of flavor. Very similar to the English originals. After that I simply work my way down the list, or order whatever suits my mood. (I live for variety, so I seldom drink the same beer twice in a row.) My favori 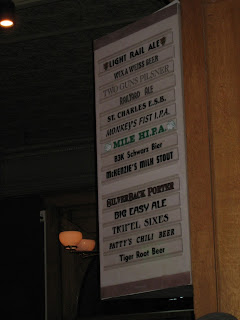 te beer at the Wynkoop is the Churchyard. Also cask-conditioned, the Churchyard is a dark, malty, rich, sweetish, strong Scotch ale. But it is a rotator, so it is not always on tap. If it is on tap for your next visit, I highly recommend it.

In my opinion, most of the Wynkoop’s beers are flavorful, but in balance. Especially the regulars. This is one thing I’ve always appreciated. I can bring anyone there, and they will find a great beer that they enjoy. With that said, Andy Brown, the head brewmaster, is not afraid to experiment and get bold. His latest toy is a self-designed and built hopback that he has put it to good use on the new Mile HI.P.A. If you love hops, book a ticket to Denver today. This is an extremely hoppy beer with a very American hop profile.

When visiting the Wynkoop, if you ever have any questions about any of their offerings, don’t be afraid to ask the knowledgeable staff. They are well educated on the beers they serve. And they won’t hesitate to pour you a sample if you want to decide for yourself. Next time you’re in Denver, I highly recommend a visit to the Wynkoop. Whether it is for the GABF, a Rockies game, or to ride the Ski Train. And if you live in the area, go visit the brewery on 18th and Wynkoop street. It has been my home brewery/pub since June of 1991.

Next week I’m off to Mountain View, CA for a short business trip, and I hope to have something to report from that excursion. I’ll try to keep it shorter next time.
Posted by Cody Christman at 5:48 PM