I just returned from a business trip to the San Jose area. California is always a great destination, because they have more breweries (by a factor of two) than any other state – 218. When traveling I always pick my hotels based on two things – it needs to have a good exercise facility, and it has to be walking distance to a brewpub. This trip I stayed in “downtown” Mountain View, about a 10-minute walk from the Tied House Brewery. (954 Villa St.) 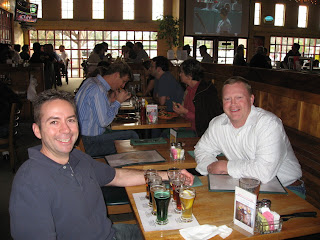 I took this opportunity to hook up with my old buddy Art Jenkins. (a.k.a. the Newt) We graduated from high school together in Billings Montana. After that we both earned Electrical Engineering degrees, mine was from Montana State, while his came from Seattle University. After college I moved to Denver while he moved to San Jose. We’ve always kept in touch, and in the early 90s I used to travel to San Jose quite a bit for work. We had some crazy times back then. It has been about 15 years since we had been at the Tied House together – which at the time turned into one of my favorite breweries away from home.

After the quick walk, I was in front of the brewery waiting for the Newt to arrive when I heard a car honk. I was sure it was Art notifying me that he saw me, but when I looked up, I saw two chickens crossing the road holding up traffic. I’m not sure what chickens were doing roaming the streets of Silicon Valley, but it did give me a flash back to Hawaii. Kinda funny. Anyway, the Newt finally showed up and we took a seat. The Tied House was not quite as big as I remember, but I could tell it was the same place. Art ordered a Cascade Amber, their flagship beer, and I ordered a sampler. They had eight beers on tap, and I got a taste of all of them. (Alpine Gold – golden ale, Cascade Amber – pale/amber ale, Ironwood Dark – brown ale, New World Wheat – American style Hefeweizen, Oatmeal Stout, Passion Fruit Pale, ESB, and a “green beer” for St. Pats day.) The two beers that stood out to me were the Passion Fruit Pale and the green beer. It had been a while since I’d had an American style fruit beer. I used to drink these all the time when I spent a summer interning for Tektronix in Portland in ’89. That was the first time I’d had fruit beer. Anymore there do not seem to be as many on most brewers’ taps, and I just don’t drink them much any more. Anyway, it was nice to sample one again - it was light and refreshing. A great warm weather beer.

The other beer that stood out was the green beer. (I don’t think it had a name) It looked pretty bright, but the waitress swore it would not turn my tongue and lips green. After I got past the color, I was surprised by the flavor. It was definitely fermented with a phenolic Belgian yeast strain. I am not an expert in green beer, but having consumed a few in my college days, I remember them being died Coors Light. I always thought the intention was for them to be easily consumed in mass quantities during the St. Patrick’s Day holiday season. Those expecting 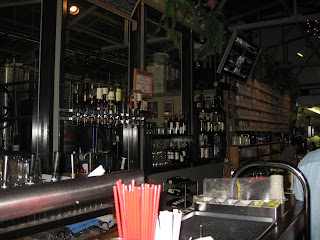 died light beer had a surprise with this beer. It was a little difficult to judge given that I could not get over the color, but if blindfolded, it would pass for an excellent Belgian style ale. It makes me wonder if it was designed this way, or if the Abbey Ale was not selling well, so it turned into the next seasonal with the help of a little food coloring.

Regardless, I found the Tied House’s beer of excellent quality, balanced in world of extreme beers, and very enjoyable. Their flagship beer, Cascade Amber, described as a pale/amber ale, was well hopped, but overall had a better malt and hop balance than most pale ales being brewed today. It had a rich maltiness with a touch of roasted malt or possibly dark Munich malt. Hopheads may not travel across the country for this one, but most others will find it delicious and will be able to drink two or three in a row without getting burned out on citrusy hops.

One final note. The Tied House also had an excellent kitchen. They offer pub fare, sausages, Cajun, south of the border, California cuisine and more. I had the Char Crusted Hanger Steak after the Newt and I split a plate of onion rings as our appetizer. The roasted garlic marinated steak really hit the spot after finishing the eight well-sized samplers. Just like the old days, the Tide House is a great place to go for great beer, food and atmosphere. And it was good to get back there with my old buddy the Newt!
Posted by Cody Christman at 6:51 PM