The Barrelworks at Firestone Walker


Last summer I received a letter from Frontier Airlines warning that our frequent flier miles were about to expire.  Since Frontier pulled out of Billings we have had little reason to use them anymore.  But Joycelyn had an idea to put our miles to use and take a long weekend trip to Santa Barbara California.  For years we've talked about visiting her cousin and his wife there, so this was a perfect opportunity to take a quick trip to see family and visit some new breweries.

Whenever I travel to a new location I do some searching for breweries in the area.  I knew the Firestone Walker Brewing Company was based in southern California, but did not realize how close they were to Santa Barbara.

I first discovered Firestone Walker beers on a trip to Northern California about six years ago.  Since that time their bottles have become readily available in Colorado.  I really enjoy this brewery because their staples are excellent examples of traditional British Ales. 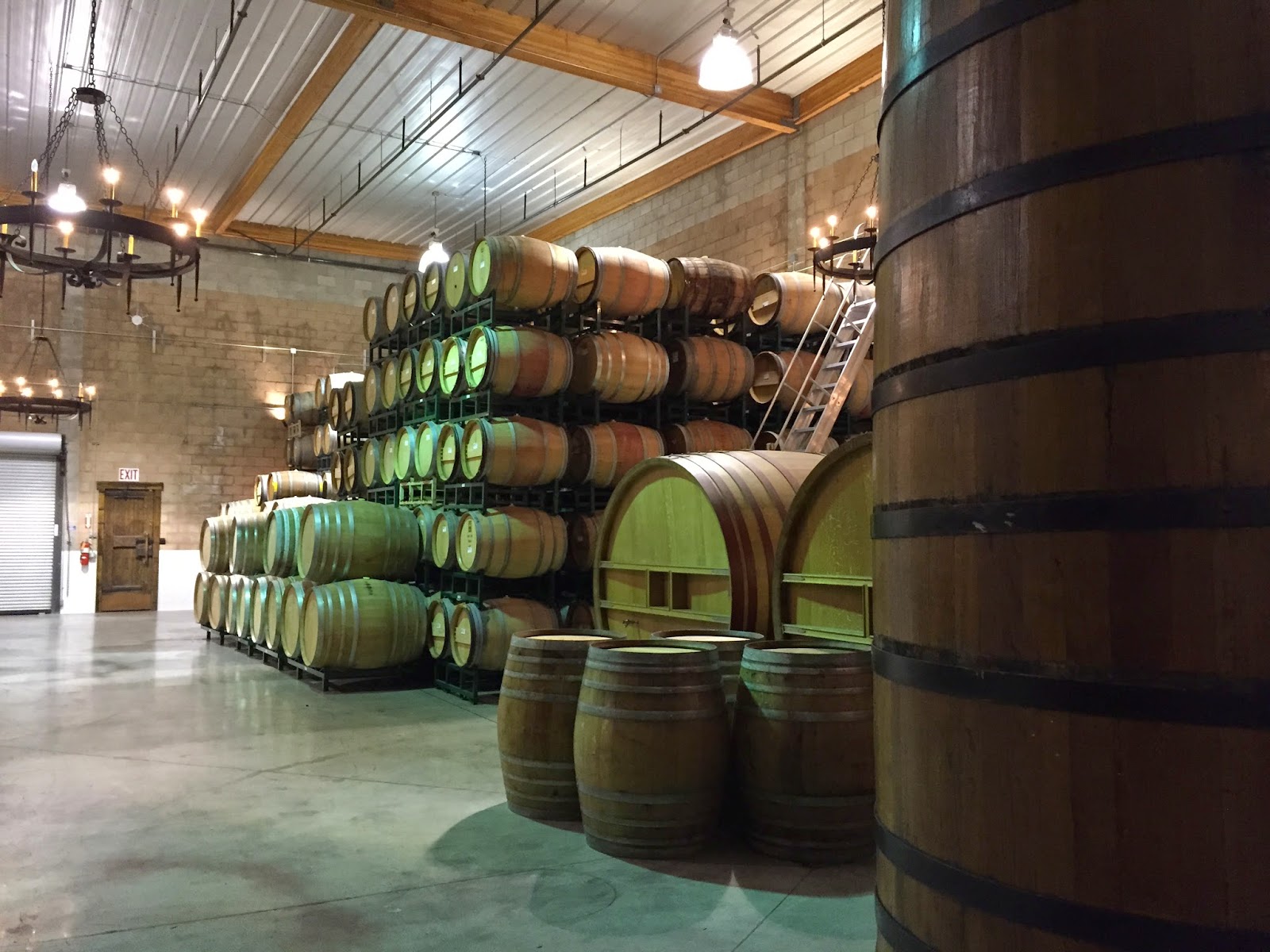 Firestone Walker was founded in 1996 and has grown rapidly ever since - racking up much praise along the way.  Their accolades include individual & overall brewery awards from The World Beer Cup, the Brewers Association, and the GABF.  It is also worth noting that Firestone Walker is very unique in their production process.  They are one of only two breweries that still employ the famous Burton Union System (from Burton upon Trent north of London) - a barrel fermentation and blow off system that recirculates wort.

A short drive from Santa Barbara is the town of Buellton where the Firestone Walker Brewery is located.  (They also have a facility in Paso Robles)  To get there follow highway 154 and climb north out of Santa Barbara up into the mountains.  You will ultimately drop into the picturesque Santa Ynez Valley.

The unique geography of Santa Ynez is created by the only significant stretch of east-west Pacific Ocean coastline between Alaska and Mexico.  This anomaly contributes to the valley's Mediterranean climate.  The rolling hills, orchards, flora and even soil reminded me of the Tuscany region of Italy.

There are a number of quaint villages in the valley.  After you pass the boutique wine tasting rooms in Los Olivos stop in the beautiful Danish community of Solvang and grab a plate of Aebleskiver.  There you can also visit the historic Santa Ines Mission.  But you will eventually make your way to Buellton for a visit of the Firestone Walker Brewery.  The movie Sideways popularized this area for wine lovers, now the rapid rise of FW is doing the same for beer. 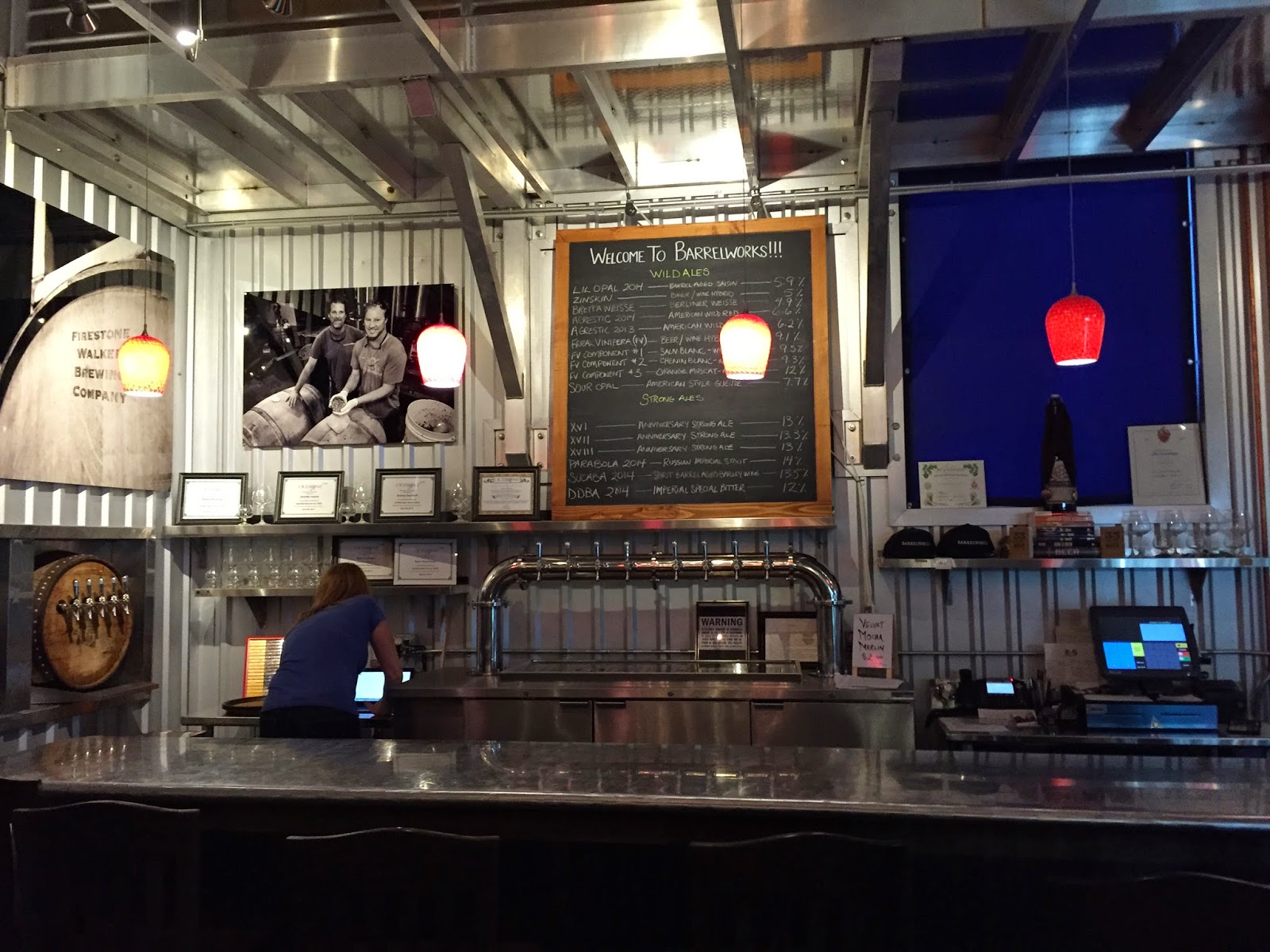 
Firestone Walker's brewery is a large building right off of Highway 101.  You can't miss it.  The facility serves as both a brewery and a restaurant.  When we arrived the place was buzzing with families out for an early evening dinner.  There were numerous kids running around.  This is an ideal spot for locals to sit down with some good food and enjoy fresh, craft beer.

But there was another section of the building walled off from the restaurant called the "Barrelworks." Having an inside tip we passed the main bar and headed right for this not-so-well-marked enclosure.  The Barrelworks offers $3 three ounce samples of a number of special FW offerings.  And it does so in a spectacular setting.

The quaint area is walled off from the restaurant and provides a close up view of FW's barrel storage facility.  There are a number of barrels of different shapes, sizes and origins... even a large foudre.  (I've seen these in wineries near Napa.  Redwood?)  The stainless steel bar and towering wood vessels create the perfect setting to sample some very special ales.

There were about 20 different beers on tap the day we visited.  They were split into two categories: "Wild Ales" and "Strong Ales."  Every beer served had spent at least one year in wood.  In addition, the Barrelworks offered a few verticals allowing the drinker to see how a specific style of beer matured over one, three, or more years.

It was obvious that Firestone Walker takes a lot of pride in this bar.  They had every detail covered down to extensive notes on each beer served.  And the servers were all required to have Cicerone certifications.

There was one thing that surprised me.  It was "happy hour" time on a Friday afternoon, and we were the only patrons in the room.  I was shocked.  This was a beer lover's dream come true and it was like the clientele in the restaurant didn't even know this area of the brewery existed.  Buellton is a small town which may explain the lack of interest in the "beer geek" area.  I thought to myself, if this place was in LoDo Denver, or Santa Barbara's Funk Zone, it would be too packed to get a seat.

I got the chance to sample four beers in the Barrelworks: the 2013 vintage of their American Wild Red (Agrestic), the Sucaba Barleywine, their XVI Strong Ale, and finally a 2014 Saison called Lil Opal.  I'll share the tasting notes I jotted down on the Saison.

Lil Opal is a brett accented Saison aged for over a year in 75% French / 25% American oak.  It weighs in at a respectable 5.9% abv.  It poured a cloudy pumpkin orange with a tight off-white cap.  The aroma was dominated by fresh oak with a slight pineapple tartness.  The flavor was much more subtle than the nose would suggest.  Lil Opal had a mild, fruity flavor with perhaps a touch of golden syrup character that propped up the body.  It finished quite dry which is to be expected from any beer fermented (wholly or in part) by brettanomyces.  Overall this was an excellent Farmhouse Ale with a distinct cellar character.

The other beers I sampled were equally as impressive.  If you love barrel aged strong and/or sour beers, do not pass by pass this part of California without a visit to FW's Barrelworks! 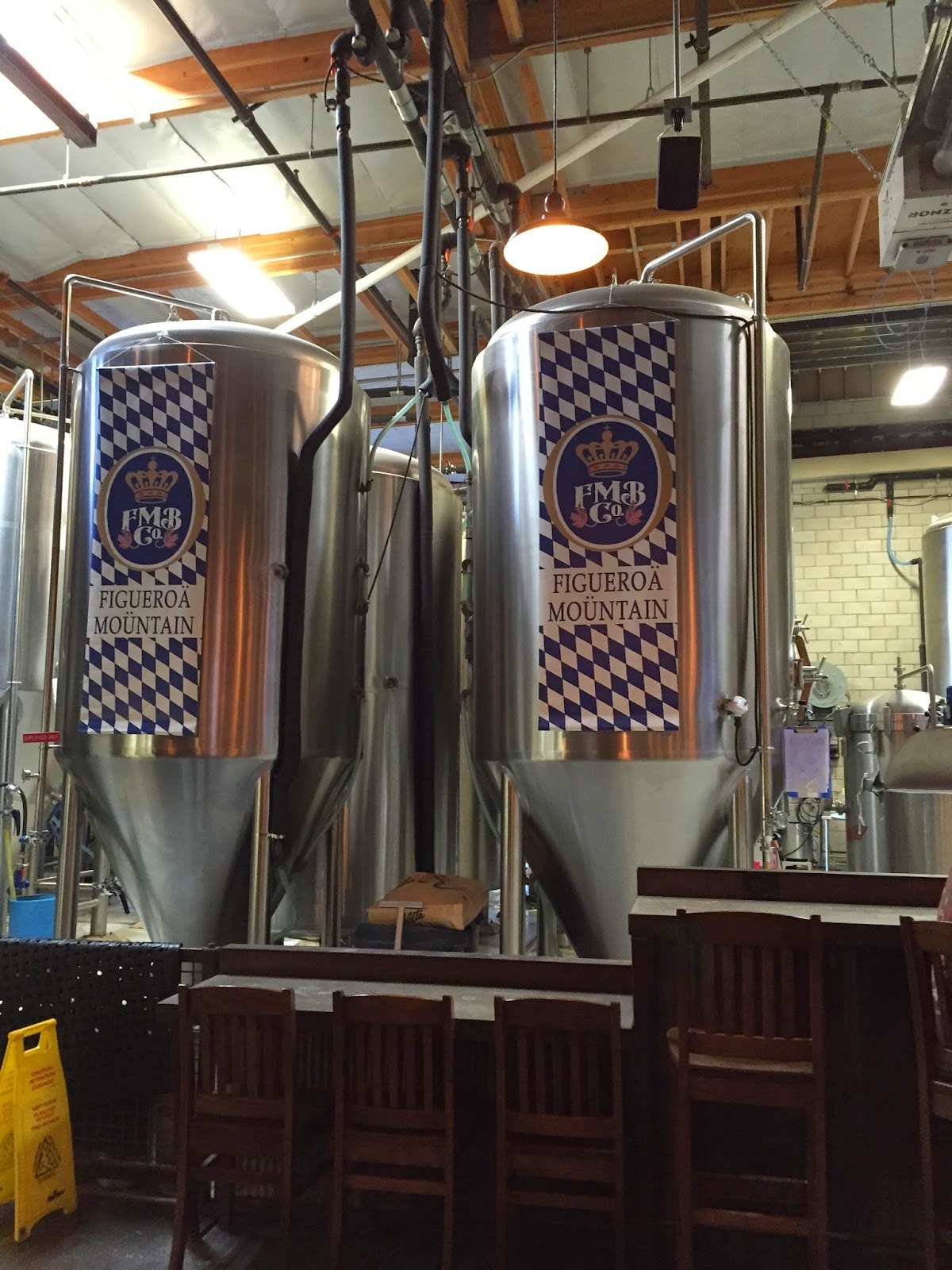 For those that did not get their fill visiting Firestone Walker, there is another brewery in this small town.  Figueroa Mountain is short drive across the 101 located in a light industrial neighborhood.  They make the most of their asphalt and concrete setting.  Inside, at the foot of massive fermenting vessels, they have a small bar and tasting room with about 20 beers on tap.  And on nice days the beer garden outside is a great place to enjoy a sampler or couple of pints.  Their beers range from lagers and Kölsch to wheat beers, and a number of ales - from Pale Ale to Brown.  As the brewery moniker suggests their beers are named after local landmarks.

Figueroa Mountain also has a satellite pub in Santa Barbara's Funk Zone not far off the beach.  They offer a similar selection as the brewery.  Show up early if you want to get a seat however!

Posted by Cody Christman at 5:20 PM