2013 Beerdrinker of the Year Search


You could be the next Beerdrinker of the Year!

You could be the next Beerdrinker of the Year. If you are reading this blog you are a beer lover – and that is the first step! To apply you need to submit a Beer Resume. This document must include your beer philosophy, details on your passion for beer, and your 2012 beer experiences. It should “detail the entrant’s understanding of beer and its history and importance to civilization, and the entrant’s efforts to educate others to the joys of great beer.”

And all of this cannot exceed three 8.5 x 11″ pages in 12-point font. Your beer resume needs to be emailed into the Wynkoop no later than December 31st. There are a few other rules, so make sure and check out the official Beerdrinker of the Year web site for all of the details. (http://wynkoop.com/beer-blog/item/157-2013-beerdrinker-of-the-year-search-is-underway)

As an example, and to view the resume that got me into the finals, check out my 2009 resume. Each year, all of the beer resumes received by the Wynkoop are reviewed and thinned down to the top 10, at which point they are sent out to a panel of experts around the country to select the three finalists. Those lucky three will be flown to Denver for the finals on February 23th, 2013, at which time seven wigged & robed judges will ultimately select the winner.

A good resume will take some work, so hopefully you’ve already started, or are touching up a previous year’s application. (I submitted a resume in 1997 and 2005 before my 2009 resume got me to the finals.) I encourage all of you to take a shot at the ultimate beer accolade!

I'm sure you all heard the news this week.  The Trappist Abbey of Saint Sixtus of Westvleteren needs a new roof, in addition to some other repairs, so the reclusive and silent order decided to sell a limited number of six-packs of their famous Westvleteren XII to the US market.  This is a temporary promotion, and don't expect it to come back.  This order of monks is not interested in making money, which they could obviously make a lot of if they wished.  Needless to say they are not capitalists.  Typically their beer is only available, on a very limited basis, sold directly from the monastery. 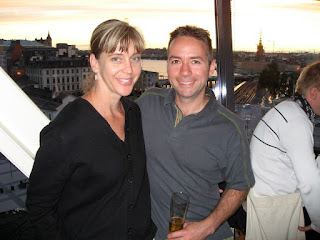 The six-packs are going for around $85, which is actually a deal.  The four liquor stores in Colorado lucky enough to get 35 six packs of the limited distribution all sold out in minutes.

Did I get one?  No, I did not.  But I've had Westvleteren XII before in 2008 during a trip to Sweden.  Our B&B was located in the Soedermalm district of Stockholm.  Near our flat was a bar and restaurant called Akkurat.  If you ever visit Stockholm, a visit to Akkurat is a must.  Upon entering the bar and bellying-up, the tender gave me a small-phone-book-sized list of their unique bottled and tap beers.  There were specialties from Sweden, Germany, Belgium, etc.  After a few beers and some discussion, the bartender said, "you sound like you know a thing or two about beer."  He took away the beer menu I had and replaced it with a large-phone-book-sized list of their beer.

I've never seen anything like this before.  For example, you could not only order Chimay Red, White, or Blue - you could also pick the vintage.  A 2002 Red, or 1998 White, for example.  They had quite a cellar collection.

Then I saw Westvleteren XII.  I pointed and asked, "You don't really have this?"  I've been to Belgium numerous times, and never seen that beer for sale.  The bartender replied, "Of course we do."  I don't know how they got it (it is not supposed to be resold), but they did.  I ordered one.  To this day it is the most expensive single beer I've purchased in my life.  Around $60 for one 1/3 liter bottle.

Westvleteren bottles have no label.  All of the information required by the EU to sell an alcoholic beverage is printed on the colored cap - the color being the primary way to differentiate between their three offerings.  The bartender used a Swedish Crown coin over the cap and carefully opened the beer.  It was served in the proper glass, and he presented me with the pristine bottle cap to boot.  The rest is history.  And yes, it was worth the hype.