My wife and I spent a wonderful Thanksgiving in Sierra Vista Arizona with my brother and his family. One of the highlights of the weekend was a trip to the old mining town Bisbee in the mountains east of Sierra Visa. Bisbee was founded as a gold, silver and copper mining town in the 1880s. The huge, and now dormant, open pit mine east of town reminded me of a smaller version of "the pit" in Butte Montana. Now the town serves as a tourist trap and artist hangout. A perfect place for a brewery!

The Old Bisbee Brewing Company is not that old at all – opening only eight months ago. The brewery is split between two buildings. A small brewhouse contains their custom built 10-barrel mashing and lautering system as well as four fermentation vessels. Across the narrow alley sits the taproom and all of the serving vessels. Both buildings are fairly small, with the taproom seating only 30 people. To transfer beer between the two locations, the owners actually jack hammered up the alley and ran lines under the asphalt.

During our brief visit I sampled Bisbee’s Copper City Ale, Wit, fine Imperial Stout, IPA, and easy drinking Pale Ale. My favorite was their Copper City Ale – a Nut Brow Ale. (OG 1.052, FG 1.018, 4.5% abv) The color was blood red and it was served almost completely flat with no head at all. The nose was of toasty malt, becoming stronger as my pint warmed. 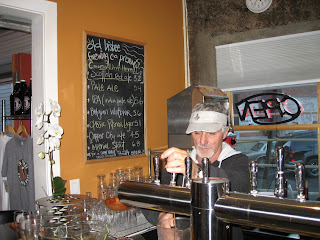 A strong biscuit malt character dominated the flavor with notes of dark crystal and no hop preseience at all. Copper City finished with dry toasty malt and a touch of diacetyl. It was dark in color, but quite light on the palate. Copper City is definitely an “old school” Brown Ale employing dark crytal (120 L) and over 14% Victory malt (hence the biscuit and toasty flavors), so it relies on a stong dose of amber malt (Victory) instead of chocolate malt in the gain bill. All of their beers I sampled, except for the Wit, were served relatively flat. They were also served fairly cold. Except for the Wit, all contained noticable diactyl.

Tours are available upon request. The brewers are also open to letting people just walk into the brewhouse and look around. Co-owner and brewer Dale Fountaine happened to be prescent when we visited. He was very friendly and willing to answer any questions we had about history, process, business, etc. Dale was proud that Old Bisbee Brewing does not have any secrets. All recipes, mash schedules, and fermentations notes are proudly displayed for any patron to view – with a clipboard hanging on each of the serving vessels in the taproom where everyone sits.

Both Dale and his partner Victor Winquist are in thier 60s. Dale noted that they just brew and own the business to be happy, and getting big is not a priority. Neither were homebrewers, but both had extensive experience in the wine industry. Victor’s daughter Mindy is officially the head brewer.

Bisbee is a very eclectic tourist town and worth a visit if you are in the area. Old Bisbee Brewing Company does not bottle or keg, so the only place to get their beer is directly from the taproom. (growlers are available) This young brewery is still working out some small kinks, but while in Bisbee a visit to this taproom is must for any true beer lover.
Posted by Cody Christman at 1:48 PM